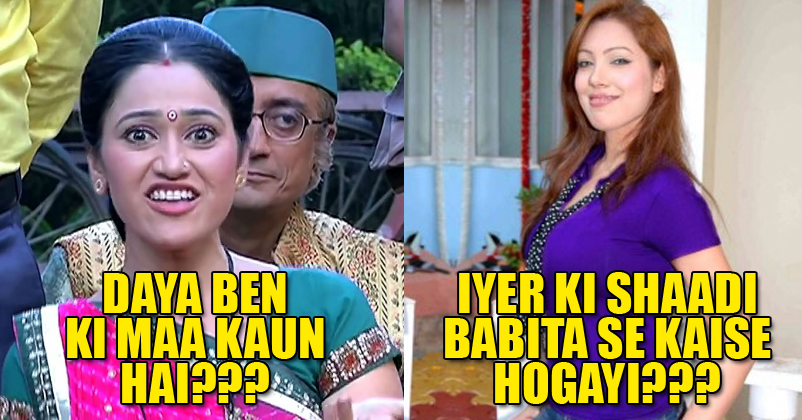 Taarak Mehta Ka Ooltah Chashmah is now no more an unfamiliar name to the Indian Television. It has become one of the most watched sitcoms of the modern era. At present when people are all stressed out because of their work and as a side effect of this competitive age. Taarak Mehta Ka Ooltah Chashmah serves a dose of relief, gives a heart burst laughter and makes us forget our everyday worries. It’s different from other sitcoms for so many reasons; it uses clean comedy to entertain its viewers, it has well-developed characters and the show promotes goodwill and reflects the responsibilities we have as being an Indian. The show has already crossed over 1700 episodes which is a big achievement for any Indian sitcom. But over the period of 7 years and more, the show has left us with so many unanswered questions.

So let’s take a look at the 13 unanswered questions (along with trolls) that every Taarak Mehta Ka Ooltah Chashmah fan wants an answer for.

1. Who exactly is Dayaben’s mother? Ever since the show started we always see a scene in any episode where Daya is speaking to her mom over the phone, but we never see the mother’s face. Someone call C.I.D. to solve the mystery! 2. Jethalal Gada is a synonym for bad luck. When will the stars change for him? Now that’s a question that no one can answer. If internet has Bad Luck Brian, we have our own Bad Luck Jetha. 3. If there’s one thing that hasn’t changed in the time period of 7 years it’s the eternal demand of Natu Kaka to get a raise in his salary. Good days have come for the nation, but yet to come for Natu Kaka. 4. Is there anything that Bagha can’t fix or do? From repairing mobile phones to suggesting crazy ideas (which works great in some cases), Bagha never fails to amaze the audience. 5. Who are Pinku’s parents? Pinku has been an integral part of the Tapu Sena. Never missed an opportunity to participate in the wild adventures of Tapu Sena. But his background, family history remains a question mark. 6. When will Popatlal get married? Popatlal is undoubtedly the most desperate bachelor in the world. But he has nothing to worry, he’s got Rahul Gandhi and Salman Khan along with him in the search of a perfect bride. 7. When will Sundarlal stop making an ass out of Jethalal? Whenever you hear a taxi horn in the Gokuldham Society, it’s a warning sign for Jetha telling “Brace yourself SUNDARLAL is coming”. 8. Would there be an episode where Jetha is not scolded by his param pujiye bapuji Shri. Champaklal Jayantilal Gada, and is allowed to sleep tight, wake up late on a fine sunday. And has Champaklal taken up the responsibility of being a universal chacha? 9. What’s the purpose behind the heated chemistry between Jetha and Babita? What does Jetha want? We all know the answer, but it’s a family show right? I guess that proverb fits well to his situation “Ghar ki murgi dal barabar”. 10. Where does Gokuldham Society gets its fund from? Every new day we find them celebrating, decorating the entire society like some marriage stage. The Ekmev Secretary Shri. Atmaram Tukaram Bhide has denied about having large amounts of money in the society fund. Phir ji yeh paisa kaha se aata hai, yahi toh SCAM hai Ji! 11. How is it possible for any person to do garba 24/7? What’s the secret behind the energy and spirits of Dayaben Gada? She should be the brand ambassador of Dabur Glucon D. 12. Why does Rita Reporter cover only the Gokuldham Society? She is a news reporter for a big channel “KAL TAK”, and yet we see her covering only the small petty issues of her own society. 13. Is Tapu Sena the new alternative against all the crimes, injustice done in our society? There’s almost nothing that Tapu Sena can’t do. From saving the society from local goons to solving the mystery of the ghost, there’s nothing that they can’t do to save the day.