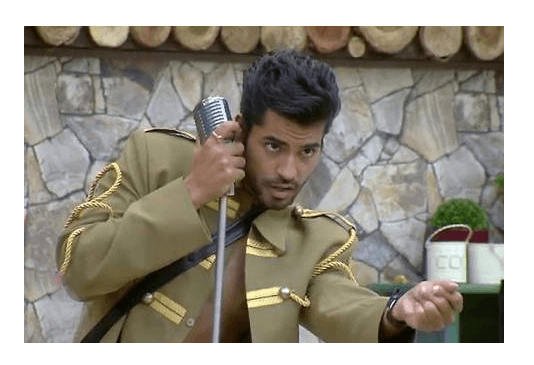 During Hijack task, Karishma started putting chillies on Gautam face and in response Gautam abused Karishma as she was crossing her limits. Abuse is pretty normal in Bigg Boss house but Karishma took this issue to an extreme level and made sure that all the housemates go against Gautam. He was corned by 14 other housemates at that moment. Everyone was supporting Karishma & he was left alone. He started crying & even touched Karishma’s feet, said sorry more than 100 times but Karishma only wanted either him to be out of Bigg Boss house or disqualification from task.
Are you kidding me?? Eviction for abusing?? Or disqualification from task for abusing
This has never happened in Bigg boss that person is evicted or disqualified just for abusing. She was new in Bigg Boss house but for fans it was 8th season & they knew it is just a game by Karishma but this pointless accusation by her made Gautam famous. He was hero in the eyes of Bigg Boss fans as he did nothing wrong. He didn’t hit Karishma, it was just abuse which Karishma exaggerated and took to another level. This famous makeup argument again made Gautam Gualti – The Hero. This time, he became hero even in the front of housemates. Bigg Boss asked 10 random questions to Karishma & Gautam where they both have to agree on 3. Karishma wanted her makeup & Gautam Gulati wanted Sushant to get free from “Sewak Role”. Interesting thing in this incident was – Sushant & Gautam were enemies while Sushant & Karishma were best friends but Karishma wanted her makeup instead of saving Sushant. This made Karishma Tanna a laughing streak on social networks & Gautam Gulati fan following started rising again. Bigg Boss gave Gautam a chance of becoming one day dictator & he composed a song “We Love We Love Gauti” which was all over social media. His fans were started singing this Gautam anthem almost daily & this anthem made him more popular on Social networks – Facebook & Twitter. All other contestants went against him and started blackening his posters and throwing his mannequin in the pool but he took it sportingly. He didn’t lose his calm & actually celebrating it with other contestants. Had it been anybody else in place of him, he would have reacted in very harsh way. Karishma also got good fan following when she started raising her voice like Gauhar Khan but her fans started disliking her when she started showing her real face. She went for makeup over Sushant. When Salman asked some general knowledge questions, she couldn’t answer. She said Narendra Modi is President & 5x5x0 = 25. How could anyone be a fan of self-centred Karishma Tanna and fans started moving away from her. She was the one, who was saying from day one that she has a boy friend outside & she loves him but as end of the season came, she fell in love with Upen. This double sided face made her villain & Gautam as Hero. Bigg Boss 8 Voting Trend:- Gautam Gulati Will Win The Show By Big Margin
10 Bollwood Movies That Will Take You Through India’s Journey