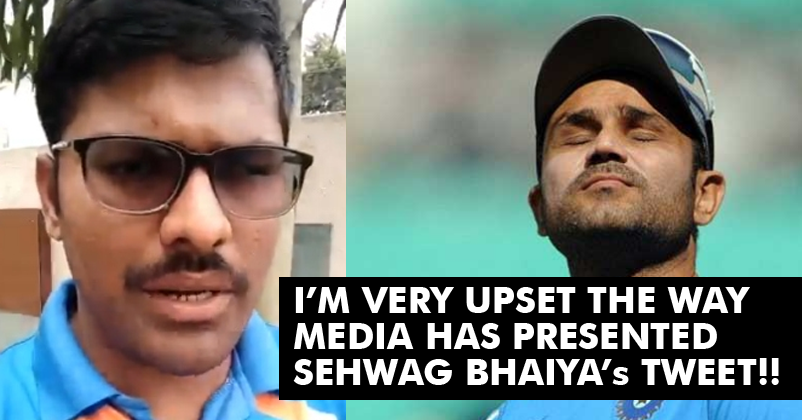 The number of recent incidents of National Media’s heritage being put to shame has been quite significant. To satisfy their reader’s choice of content, the present day media is ready to put their everything on stake. In a recent such incident, National Media’s dignity has suffered yet another jolt.

It was all smiles when the Blind Indian Cricket Team defeated arch rivals Pakistan comfortably by 9 wickets to defend their title of T20 Blind World Cup on last Sunday. Wishes poured in from almost every field for the triumphant lads. From Shah Rukh Khan to Virender Sehwag, everyone came up to express their delight for the successful campaign of the men in blue. However, Media loves creating a controversy out of everything nowadays. The story began when Virender Sehwag used the Hashtag #OtherMenInBlue for the Blind Indian Cricket Team. Sehwag got criticised on twitter which is, to an extent, very much acceptable. However, The Indian Express went a step ahead and stated that it wasn’t just the twitteratis who got offended by Sehwag’s tweet, even the captain of Indian Blind Cricket Team was left unimpressed. The Indian Express on their website quoted Ajay Kumar Reddy saying, “We wear the same blue jersey, represent the same tri-colour and play with equal pride and passion
then why term us as ‘other’? It is appreciable that he congratulated us but then we are no others.”

This statement of Ajay Kumar Reddy issued by The Indian Express was indeed surprising and left even Sehwag speechless. Sehwag, in his reply to justify the Hashtag #OtherMenInBlue, stated that it was to promote the team and their glorious achievement. However, the report of Indian Express didn’t leave Sehwag with many options but to go quite.

In a befitting reply to the Indian Express and every single twitterati who criticised Sehwag, Ajay Kumar Reddy, the captain of Indian Blind Cricket Team, came up to expose the truth of Indian Express. In a video posted by CABI (Cricket Association for the Blind in India), Ajay Kumar Reddy explained that he never said what Indian Express had stated. He was upset that the media twisted his words for their own commercial benefits and said that Virender Sehwag is by far his favourite cricketer and will always remain the same.

This is the video posted by CABI where Ajay Kumar Reddy has expressed his sorrow over the fake presentation of his words by Indian Express and also demanded an apology from them for the same.

After the reality came up, Virender Sehwag too made a tweet to shut all his haters up. He requested the media to stop spreading fake news and start trying some real positive stuff.

Don't be upset Ajay. You &your boys are truly inspiring.Will meet soon. Media,I think u can do better than clickbait.Positive news works.Try https://t.co/57NTFU8aOQ

This trend of creating fake news to generate clicks on their website should stop at the earliest. The dignity of National Media is concerned with every single member of its family. Be it Zee News, NDTV or the recently exposed Indian Express, biased and orchestrated news have only defamed the whole of National Media. Do let us know what you feel about this fumble from Indian Express just to get some extra viewers in our comments section below.

Viru Was Trolled For Calling Blind Cricket Team “Other Men In Blue”! He Gave A Befitting Reply!
Top 10 Sexiest And Most Dangerous Female Bodybuilders!