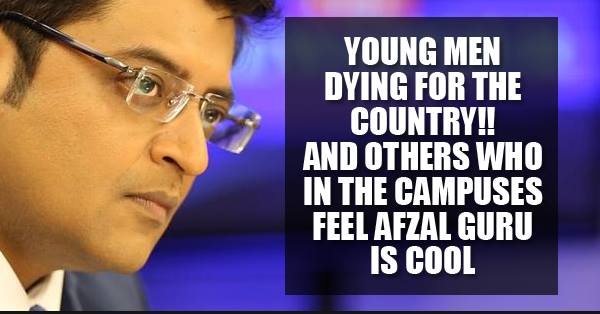 In this video, Arnab Goswami has thrashed each and every person who has been raising their voices in support of terrorists Afzal Guru and Yakub Memon. He has made his stand clear that he and his channel are backing the armed forces, the Indian soldiers who are fighting the enemies of our country and not even thinking twice before laying down their lives. He has also asked the citizens of India to make a choice and take a stand on this matter and let the supporters of Afzal & Yakub know that Indians are pretty clear about what is correct and what is wrong.

In fact, this time he has not only ripped apart the students who are busy in organizing theoretical anti-national debates but also targeted all the journalists who are supporting Afzal and Memon. Arnab has asked about the motivation of people who are supporting the terrorists and not the Indian soldiers.

Share your views about it in the comments section below.

What Happens When Sanskari Alok Nath & Smoking Hot Sunny Leone Comes Together?
This Father Realized The Big Mistake He Committed After Visiting His MARRIED Daughter