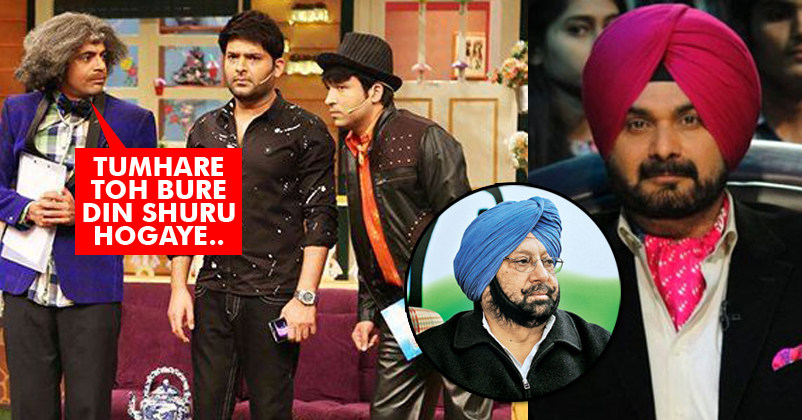 It seems bad days have come for the King of Comedy, Kapil Sharma. After Sunil and Chandan boycotted his show, there are chances that even Sidhu might quit. Yes, Navjot Singh Sidhu, who’s a minister now, wants to continue his TV career, but Captain Amarinder Singh (CM of Punjab) has opposed it. He disapproved the idea of Sidhu continuing his TV career and now, he wants legal advice on the same. The CM wants to consult the Advocate General, on which Sidhu said that he has already been elected 5 times with his shows and rules shouldn’t be changed now.

The cricketer turned politician also cited examples of ministers who are pilots or lawyers and are allowed to continue; he says that the government is targeting him just because he is related to Television industry. Captain Amarinder Singh said,

“We will have to ask our Advocate General to give us an opinion… whether a person who is a minister can do what he wants to do. It will depend entirely on what legal position is.”

There were also reports about Sidhu asking for lesser responsibilities so that he can manage his TV show too.

Sidhu has been an inseparable part of Kapil’s show and is in no mood to discontinue. Even his wife, Navjot Kaur shared a facebook post supporting him; check it out…

“Such hype has been created about Navjot earning a living from television. When I was working as a Mla , my electricity bill and tea for guests costed more. We have no other business or source of income except television. He has left 80 percent of shows which included IPL , commentator etc. Shooting for 2 shows of comedy night with Kapil takes only 5 hours in a week and that also mostly on Saturday night. I think it is a meagre time for a non socially active God fearing workaholic.” Wonder what will happen to Kapil’s show if Sidhu is forced to quit. What’s your opinion? Do share in our comments section below.

SRK Meets Anushka’s Ghost In His House Mannat & Even Kisses Her! Watch Video!
Fan Asked Varun To Name The 3rd Film In Dulhania Franchise & He Had A Humorous Reply!