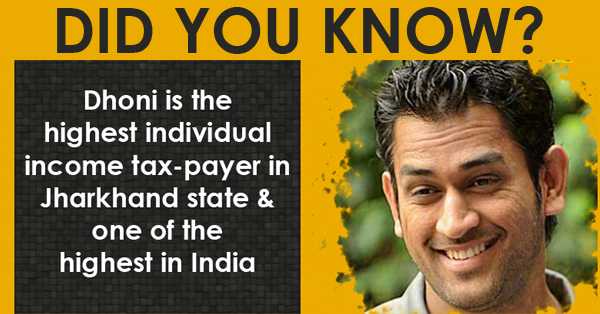 Did you know that one among the greatest Cricketers today in Cricket World was once not even interested in Cricket? He was more into Football. He was a Goalkeeper in his School Football team. He was asked to play a match for a local club by his Football coach and that was the moment he kick started his journey with a bat in hand and strong determination in his mind. On his Birthday, we today bring you 16 facts about M.S. Dhoni you didn’t know. From his love towards football to a biopic made on him, we have complied these 16 facts out of a huge number of facts.

From collecting tickets to one of the greatest icons the world admires, it wouldn’t be wrong if I quote the expression that M.S. Dhoni with his handwork had grown from Rags To Riches. From a middle class flat in Ranchi he with his efforts is now the highest tax paying individual in entire state of Jharkand. Recently released Forbes highest paid celeb list has put him on 82nd spot. He is one among the 4 Celebs in India who comfortably made it to the Forbes List. Even SRK couldn’t make it to Top 100. There are several other facts about M.S. Dhoni which will astonish you and amaze you and inspire you in all the ways possible. Have a look at these 16 facts.