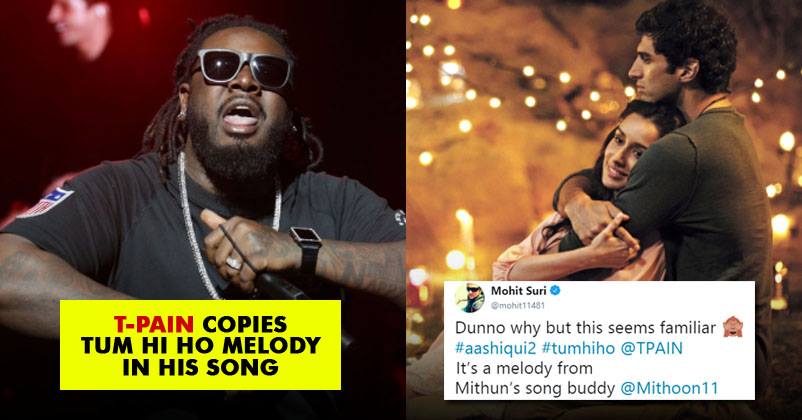 In this world of borrowed entertainment, we come across lot of Indian music composers and filmmakers being accused of plagiarizing; when they reply that they were just inspired by those international pieces.

But, the thing that happened is just the opposite. Internationally acclaimed American rapper T-Pain has been accused of getting ‘inspired’ by the song Tum Hi Ho, from the movie Aashique 2!

Mohit Suri, the director of Aashique 2 spotted it first and took to twitter to express his dismay.

Even, music composer of Aashique 2, Mithoon was astonished about this new happening!

Sir, the melody that you have used in your new song is my original work for a previously released Hindi film..The Label is looking into this.#tumhiho #Aashiqui2 https://t.co/5fnDf4sfg7

Twitter went crazy over this new act of plagiarizing!

Finally, T-Pain replied and how!

Woke up to getting dragged by brown twitter. Sooooo yea. I definitely didn’t produce this song. Had no idea that was a sample and have never heard the music before I got the beat from the producer. Easy thing to work out. The labels will be in contact. Thanx

Now, this song is off YouTube, but is available on other sites though.

Continue Reading
You may also like...
Related Topics:Plagiarism, T-Pain