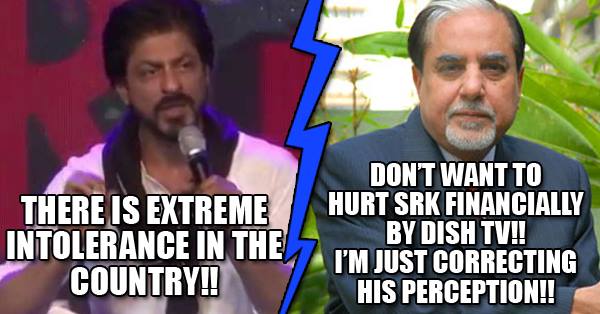 As we were sure about it, the controversy related to Shah Rukh Khan’s “extreme intolerance” is not going to die soon. Till now Shah Rukh was facing criticism from the leaders of Hindu organizations but now one Indian Business Tycoon has decided to express his dissent with Shah Rukh’s views, and it can be said that in one of the two tweets, Shah Rukh has been given a warning in polite manner.

Dr. Subhash Chandra, the owner of Zee Business Group has taken the twitter platform and expressed his dissatisfaction with the comments of Shah Rukh Khan which he made on his 50th birthday. Shah Rukh can be seen in the advertisements of Dish TV, which is a part of Zee Group so Dr. Chandra has said that he doesn’t want Shah Rukh to incur any loss (as he may be asked to leave the ads), so he should better change his perception.

On his 50th birthday, Shah Rukh was giving an interview to a new channel, where he said that there is “extreme intolerance” in the country and the people who are returning their awards are brave and if asked he will also return his award as a symbolic gesture.

This comment didn’t went well with many people, especially the leaders of Hindu organizations but this is the first time we are hearing any business person speaking on the issue.

Here are the tweets made by Dr. Subhash Chandra:

Don't want to hurt him financially by dish tv. He is younger to me hence correcting his perception