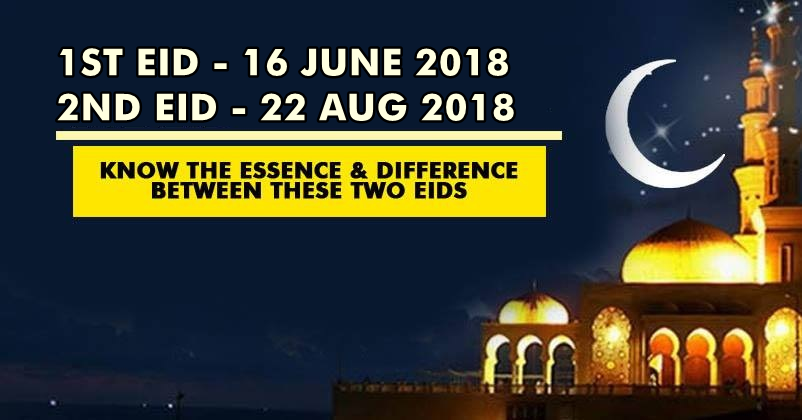 Firstly, Eid Al Adha Mubarak to all the readers!!

On this auspicious occasion we are here to share everything you must know about the Muslim festival of Eid. What do we know about this day?? Why is Eid celebrate twice in the same year?? The festival of Eid has a lot more than the yummy treats and Biryani. Here is the true story behind these two different Eids.

Ramadan Eid is the first of two Eids that is celebrated after a whole month of fasting. Ever wondered what’s the reason why Muslims restrain from eating and drinking from dawn to dusk for the entire month of Ramadan?? Fasting during Ramadan is one of the five pillars of Islam that is the expression of faith, daily prayer, charity, and performing the hajj pilgrimage in Mecca. Eid al-Fitr or Ramadan Eid is known as the festival of breaking of the fast as it marks the end of Ramadan and beginning of the next islamic month Shawwal. On completion of 29 or 30 days of fasting basis on the observation of the new moon that calls for the celebration of Ramadan Eid. Bakr-Eid is known as the festival of Sacrifice. This is the second of two Muslim holidays celebrated worldwide each year. But is considered holier and significant amongst the two. It symbolizes the willingness of Ibrahim (Abraham) to sacrifice his son, as an act of submission to God’s command. But God intervenes and replaces the child with an animal. Angel Jibra’il (Gabriel) comes to him with God’s message and informs him that his sacrifice has already been accepted. The meat from the sacrificed animal is divided into three parts. The family retains one third of the share and second is given to relatives, friends and neighbors. The remaining third is given to the poor and needy. This is the true essence of Eid! If we missed something then feel free to add in comments section below.

India & Pakistan Both Got Independence In 1947 Then Why It Was 71st For Pak & 72nd For India
Kansa Knew That Devaki’s Child Would Kill Him, Why Did He Allow Her To Stay With Vasudeva