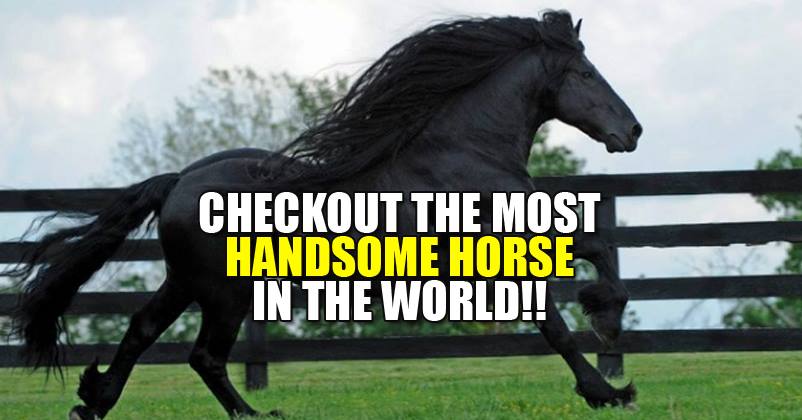 Want to meet the most handsome horse in the world? Well, meet Frederik! You are going to fall in love with his style!

Frederik is named after the Prussian Monarch who ruled from the year 1740 to 1786. He is owned by Ozark Mountains’ (U.S) Pinnacle Friesians farm and the owners call him a ‘GENTLE GIANT’. He is considered to be the most photogenic horse ever. You will just love Frederik’s majestic and long hair and of course his photogenic appearance. His beautiful photographs show how photogenic Frederik is! Millions of people all across the globe admire Frederik for his appearance.

Frederik is a mini celebrity! Frederik is no less than a mini celebrity. Many film producers have approached this stallion for various movie projects. Moreover, he has a Facebook page too which enjoys over 14k followers. Frederik’s hair changes as per his mood and when he stands, his hair reaches the ground. His services are being offered for breeding too.
Owners wrote in ad that,

“Frederik will contribute so many attributes to his offspring some of which would include height, performance potential, wonderful temperament, conformation, excellent gaits, smooth transitions, a great willingness to work, very strong black gene, and tons of hair!”

Everyone is left awestruck seeing his mane with tousled waves! One Facebook user wrote that there wouldn’t be a more sexy, handsome and majestic horse than him on the earth. Another user wrote “When I die I want to be cremated , put in a pretty little [vial] necklace and hang around the neck of a beautiful horse like Frederick for a few days,”

This 12 Year Old Has Achieved Something Which Not Even A Big Genius Can Achieve! He Has Broken All Records! Check
Secrets Revealed! Here’s Why Iranian Women Are So Beautiful! Check Out!