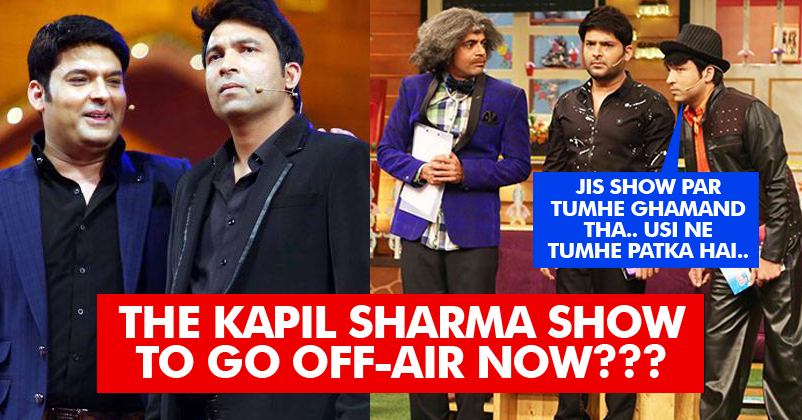 Kapil Sharma and Sunil Grover’s fight is not just affecting the artist or producers but also the audience and fans who love both the comedians.

After the fight, the family of the entire show is breaking apart. In such a scenario, the channel is suffering a lot. It is also very obvious that Sony will have to soon arrive on decision whether to continue the Kapil Sharma Show or not.

One of the highest rating show on the channel and people’s favorite – The Kapil Sharma Show is due for contract renewal next month with Sony Channel. This renewal deal, as quoted on some leading web portal, is worth 106 Crores. However, the latest buzz on media channels and news website suggest that the channel is in two minds about the contract renewal.

As mentioned by the sources of BollywoodLife and DNA:

“Kapil had to cancel shoots as he couldn’t get big celebs as guests. He has, in fact, left for Bikaner to shoot for his film, Firangi, and will return to Mumbai on March 29. The focus may be on Sunil but the one who has suffered the most from this is Chandan, with whom the whole brawl started in a flight. He wants to work but isn’t comfortable going back to the show, Pata nahin Kapil ko kiski haye lagi hai; October se show ki TRPs girti jaa rahi hai (don’t know who has cursed Kapil; TRPs of his show have been dipping since last October)”

The Channel is not very convinced with new line up of artist Kapil Sharma is bringing in. They are very skeptical about it. As we read on some websites, the channel is taking a tough decision of ending their contract and discontinuing the show. It’s one of the most upsetting thing one can think of. We aren’t sure how much of these reports are true. We pray the show continues and the fight is resolved. We really want to see the mad family of The Kapil Sharma Show make us laugh again.

This Is What Sunil Grover Is Doing After Quitting Kapil Sharma Show!
Ahsaan Quereshi Lashes Out At Sunil Grover, Calls Him Spineless And Nautanki!