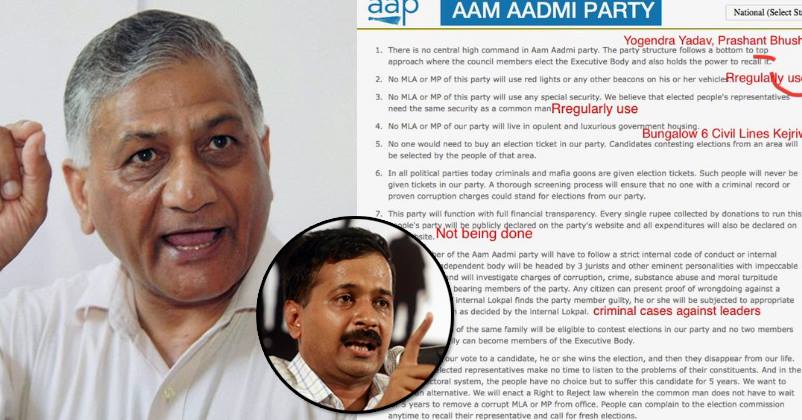 Indian Prime Minister Narendra Modi has constantly been facing flak by the opposition leaders and parties on the matter of demonetization of Rs. 500 and Rs. 1,000 currency notes. New Delhi Chief Minister Arvind Kejriwal and West Bengal Chief Minister Mamta Banerjee protested against the move and even gave 3 days to PM Modi to roll back the decision otherwise they would speed up their protest.

However, there has been no effect on PM Modi and his government and everyone knows that a strong leader like Narendra Modi won’t be making any pull back. We know that Arvind Kejriwal is very active on Twitter other than Dharnas and he keeps on tweeting and retweeting all those tweets which are against PM Modi and his government.

For example, have a look at these tweets:

Actually, Modi ji has declared a war on the people of India. It is Modi vs Aam Admi

It seems that his tweets made MoS External Affairs General V.K. Singh angry and he came upon heavily on Kejriwal by tweeting, “#DharnaMan @ArvindKejriwal but you must not stop trying.Give the people of #Delhi the #FreeWiFi, #UnPollutedAir & #15LakhCCTVs you promised” Twitterians just need a chance and when they get it, they start trolling the Delhi CM with actual facts and figures, making it quite clear that Kejriwal hasn’t fulfilled their election promises.

How many of you think so?

I strongly believe that @ArvindKejriwal wasted one seat of IIT.

Point to be noted!

.@Gen_VKSingh Forget election promises they're not even living up to their party charter @ArvindKejriwal @AamAadmiParty pic.twitter.com/yYqurueJxQ

Some users advised General V.K. Singh not to waste time and a tweet on Kejriwal:

Sir he is not worth ur tweet. Pls keep it for something useful.

Kejriwal is apt for Dharnas only?

He does nt have anything else to do other thn criticising Modi ji. Take Modi's name as his all meals. #JaiHo

Don’t forget to share your opinion with regard to the matter in the comments section below.

Kejriwal Came Up With New Slogan For Demonetization & Twitter Burst Into Kickass Trolling
11 Skills That You Can Learn In 5 Minutes Or Less And They Will Change Your Life!