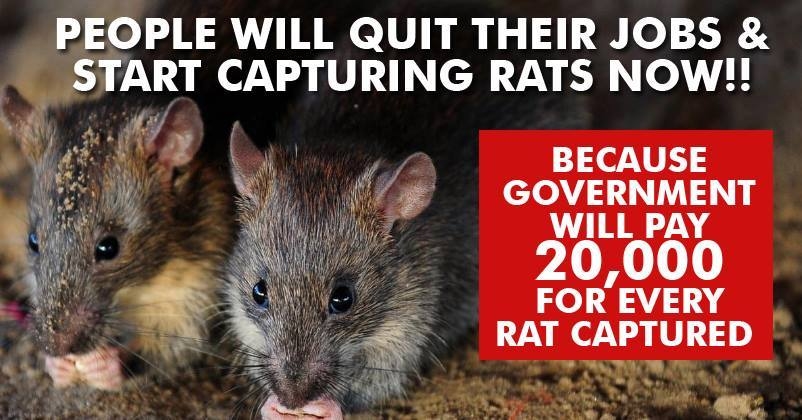 Straps yourselves in, because what you’re about to read is absurd, but true. The provincial government of Jakarta has put a bounty on the heads of all local rats. The Jakarta provincial government wants its citizens to get involved in reducing the population of rats in the capital. It is offering them a financial reward for each rat corpse they can produce. Looks like the future dystopian world as depicted in Mad Max is not that far With policies like this. Vice Governor Djarot Saiful Hidayat said that under the newly launched Rat Extermination Campaign, every citizen who brings a dead rat carcass will be given a reward of 20,000 Indonesian Rupiah by the administration. He said, as quoted by Kompas today. Just round them up (the rats), later district heads will get involved. Just count the number of rats and we’ll pay accordingly.

However Djarot did not specify whether the rats should be brought dead or alive. Looks like it doesn’t really matter, because he said he plans for them to be buried anyway so that they turn into compost.

The reason behind this move is because the rat population in Jakarta has been growing. Rats are also responsible for spreading disease to many of the city’s small children. Rat infestations are very much high in crowded areas. This is what Djarot Hidayat was quoted saying. This is not something new. In India the government once paid people to kill poisonous snakes in Delhi. In the early 1900s in Hanoi, the government instructed to kill the rats. Both of these programmes had adverse effects, the people started breeding the animals, so they could kill them and earn profit.

So guys are you surprised over this policy of killing rats or do you think it’s a right step since the population of rats is growing rapidly in Jakarta. Do share your views in the comments.

You’ll Respect Akshay Even More After Knowing What He Did For His First Producer Who Had No Money For A Kidney Transplant
This Guy Slammed Raj Thackeray & Maharahstra CM Devendra Fadnavis With One Single Facebook Post!