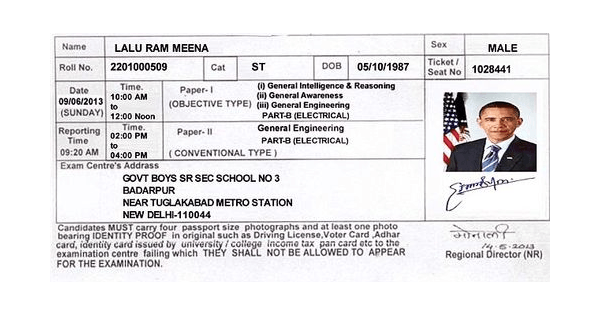 Yes, you saw it right. Barack Obama once gave the SSC Board’s exam and that too in SC category. But why??

This incident actually happened to Lalu Ram Meena, a resident of Rambas village, Dausa district who received an admit card from the SSC for the junior engineer examination that was scheduled to be held the next day. The funny part was that this admit card had the photograph of US President Barack Obama.

Lalu Ram Meena was was shocked as well as amused to receive the admit card, as he didn’t applied for the exam.  The photograph of Mr. Barack Obama on the admit card made him even more shocked.

I had, in fact, appeared for the post of lower divisional clerk ( LDC) a long time ago in 1997, but did not succeed.

Lalu Ram Meena runs a private school in Rambas Village and had already crossed the upper age limit for any exam. He has MA and B.Ed degrees.

I don’t know if Barack Obama has applied for this job. What I am sure about is that I am not eligible to apply for the post of a junior engineer.

I don’t know anyone in SSC. It is quite strange that someone prepared an admission card with my correct name and address and then post a photograph of the US president

“Anyone who made this goof-up should be punished. I was quite scared to get this card initially. When I realized that it was due to a mistake, I heaved a sigh of relief”

So, what do you think about this incident. Should the one who made this mistake be punished??
Do share your views in comment section below.