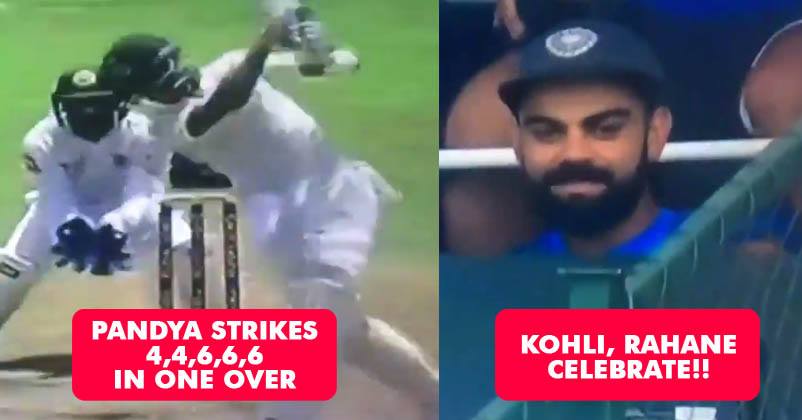 Hardik Pandya has just played 3 Test matches, but he has shown that he is no less than an expert. In the 3rd Test match against Sri Lanka, Pandya scored a brilliant century in just 86 balls. His brilliant knockout was impressive; he scored his maiden Test Century and left everyone surprised.

What was more interesting is the way Hardik Pandya smashed 26 runs in just 1 over that was bowled by Pushpakumara. Yes, he hit 2 fours and 3 sixes in that over. Everyone started celebrating because his performance was more than “Excellent”.

Pandya’s aggression deserves an applaud, don’t you feel so? With a hundred by Pandya, the first-inning total of India reached 487.

Seeing Hardik Pandya play this way, Virat Kohli and Ajinkya Rahane couldn’t stop themselves from celebrating. They were all smiles and Virat even gave a hi-five to Rahane. You can’t miss to watch the video of this celebration.

Haha, what a wonderful reaction. Even other cricketers reacted to his century, on Twitter.

What an unbelievable innings by Hardik Pandya.Counter attack at its best.Scored his first 50 of 61 balls ,the second of 25.Brilliant#INDvSL

This is breathtaking batting from @hardikpandya7. I was very keen to see if he could bat in different styles. He can.

How did you find the video?

This Is Why Shoaib Akhtar Used To Run With Open Hands After Taking A Wicket
Pakistani Cricketer Loses His Life After Being Hit By A Bouncer! May His Soul RIP!