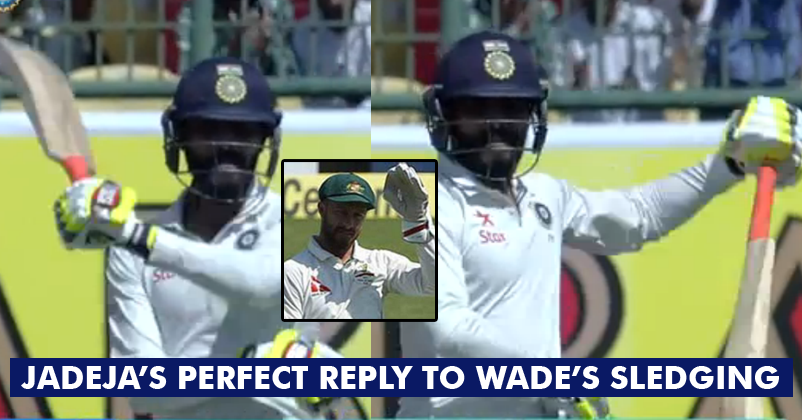 The fourth and final cricket Test match of the series is being played at Dharamshala between India and Australia and undoubtedly, it is a pressure game as the winner in this game will be the winner of the series too.

When the pressure rises, Australians start sledging and this time again, they were in full form with their ammunition of words against the left-handed batsman of Indian team, Ravindra Jadeja.

The Indian team had been struggling in the game as its six batsmen had returned to the pavilion and then Matthew Wade, the Aussie wicketkeeper, decided to target Jadeja who was at the crease with Saha. He continued, “You get wickets all over the world, mate. You’re not just a one-trick pony.”

Jadeja gave a wonderful answer to Wade when he sent a short pitch ball from Lyon for six and with this shot, he completed his 1000 runs in Test cricket. The 28 years old Indian cricketer has now become the 10th Indian player to make 1,000 runs and take 100 wickets in Test matches.

However, Wade was in no mood to stop as he taunted Jadeja, “I’m going to get a selfie with him at the end of the game. Put it on Instagram, as soon as the game finishes.”

There came a situation when the Umpire Marais Erasmus was forced to ask Wade to stop. He said, “Wade, are you going to stop that?”

But Wade was in no mood to listen; he continued with, “Careful with that sword too.”

When it became unbearable for Jadeja, he got back to Wade with this, “I don’t understand why the Australian selectors pick you for Tests. You don’t deserve it.”

Wade got support from some close fielders, “You don’t deserve to play anywhere but here (in India).”

Wade and other fielders got the perfect reply when Jadeja scored his much needed half-century and did his usual sword act.

What is your reaction over the matter? Do let us know in the comments section below.