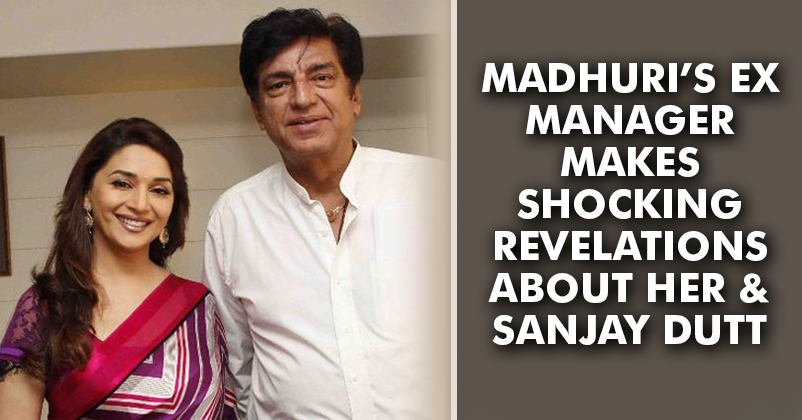 Sanjay Dutt’s upcoming biopic “Bhoomi” is in news since quite a lot of time now; first, Ranbir Kapoor’s look was revealed and then there were talks about Madhuri’s role in it.

Last week, Madhuri Dixit spoke about it and said,

“For where I am today, this [the topic of Dutt] has become redundant. Life has come a long way since then. I don’t know where these reports are coming from. In any case, it doesn’t make a difference to me.”

The actress said that she’s unaffected with all these reports and doesn’t give a damn anymore. We all know that Madhuri Dixit and Sanjay Dutt were dating each other in 90s but later the actress stepped back after he was arrested in 1993 blasts. Forget this, Rakesh Nath, the ex-manager of Madhuri Dixit has made shocking revelations about her relation with Sanjay Dutt, Jackie Shroff, Mithun Chakraborty and Anil Kapoor.

Nath wrote an article for Rediff.com and in that he wrote,

“If she was doing four films with Anil, till the time their romance story didn’t come out, the film would not be hot and saleable. Some scandals were created with Mithun (Chakraborty) and Jackie (Shroff) and even with Sanjay Dutt. All this was business strategy.”

Breaking silence on her affair with Dutt, the manager says,

“Her name has been linked with Sanjay Dutt a lot because in those days she was doing 5, 6 films with him. Most of them became hits.” We are shocked to know that it was just a publicity gimmick. Should we believe his words? We are doubting this because in a talk show when Sanjay Dutt was asked about his relation with Madhuri Dixit, he neither denied it nor confirmed it. He passed just 1 statement i.e. “As long as we both are married and happy, nothing matters.”

What’s your opinion on this? Let us know your views in our comments section below.