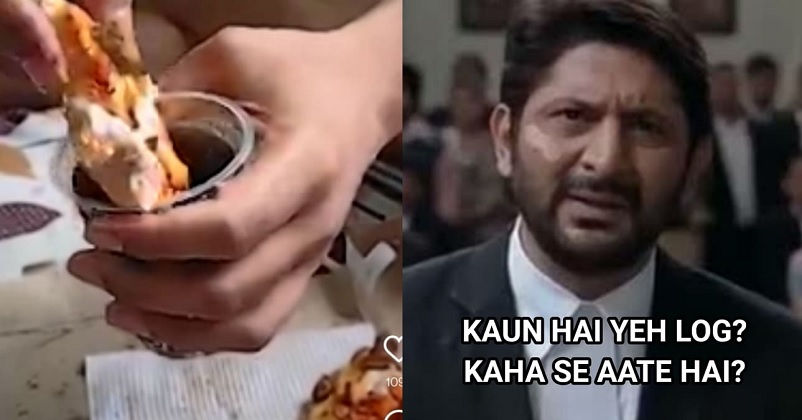 Tea and biscuit make one of the best pair of snacks which we can have at any time of the day and some of us even like to soak biscuits in tea to make it taste more delicious but have you ever heard someone soaking a pizza in a glass of soft drink.

People have become more open to experimentation nowadays and they ensure that whatever weird activity that they carry out should be recorded and posted on social media as well. Many combinations have been tried till now and while some of them are worth giving a try, there are few which may make you feel nauseated such as watermelon paanipuri, Ferroro Rocher Manchurian, Maggi Beer, Strawbiryani (Strawbeery and biryani), etc. 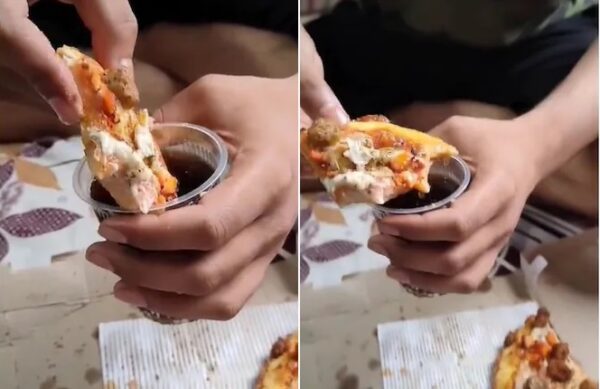 Recently, a video went viral on the Internet in which a guy was seen dunking a piece of pizza in a glass of soft drink.

Yes, you read that right! And no matter how weird it may sound or even taste, the guy seems to be actually enjoying it as he considers it having pizza in desi style.

Even the caption of the video read, “Pizza in dasi style…”.

Soon people started expressing their annoyance and frustration over it as having pizza with soft drinks make a good food combination but dunking pizza in soft drink is really not acceptable to most of the pizza lovers. Social media users slammed the person for eating pizza like this and some even said that he should be banned from eating pizza while few reminded him that it is pizza and not biscuit. Several other foodies even went on to call it a food crime and said that the world will not forgive this guy while on the other hand, there were some who advised him to dunk pizza in either milk or tea to make it more desi and healthy.

Will you ever try it? Well, do it at your own risk and don’t forget to share your experience with us 😉