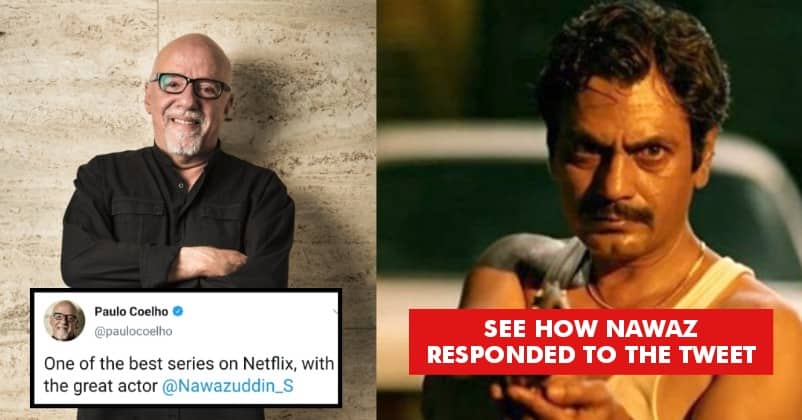 The best selling writer Paulo Coelho praised Nawazuddin Siddiqui’s work in Netflix India original ‘Sacred Games’. Paulo even recommended the series to his fans and followers through his tweet.

The writer shared the link to the show with his tweet. He wrote, “One of the best series on Netflix, with the great actor @Nawazuddin_S”

One of the best series on Netflix, with the great actor @Nawazuddin_S https://t.co/LrEo5vLhTE

The celebrated Indian actor who is a big fan of ‘The Alchemist’ writer, replied to him in the sweetest way. Siddiqui tweeted, “I have always been an ardent fan of your writing and it’s an honour to be noticed and mentioned by someone like you. I don’t have words to describe the feeling. Thank you.”

Sir @paulocoelho I hv read ur books The Alchemist & also watched d film 'Veronika decides to Die' based on ur novel I hv always been an ardent fan of ur writing & it's an honour 2 be noticed & mentioned by someone like you I don't have words to describe the feeling
Thank You 😊 https://t.co/wNyhg5ltog

Sacred Games got his second season in August this year which was supposedly its end. The series received appreciation from people around the world and Nawazuddin was praised for his amazing acting skills in the show. The web series also stars Saif Ali Khan, Pankaj Tripathi, Radhika Apte, and Kalki Koechlin in pivotal roles.