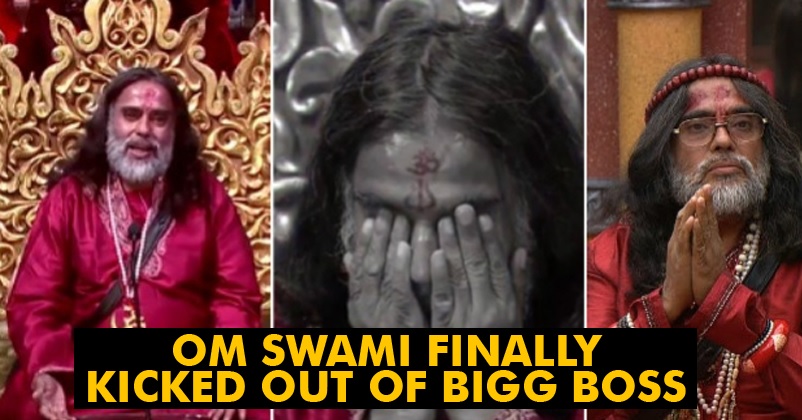 Undoubtedly, Priyanka Jagga and Om Swami have been the most controversial characters in Bigg Boss 10 house and they have given nightmares to all other contestants. Om Swami’s drama, fights and attitude is not something new; in spite of all this, he was still surviving in the house. It might be due to high TRPs that that the makers were tolerating, but not anymore; finally OM SWAMI IS OUT OF THE BIGG BOSS house. Yes, you got that right; this time, it is not an emergency exit, but he has been kicked out.

The reason for throwing Swamiji out of the house was because he did something very DISGUSTING. He had crossed all the limits and I am sure you want to know what he did this time. Well, he threw his pee on Bani, can you even imagine that?

His dramas and controversies are fine, but this creepy thing which he has done is beyond limits. Want to know how it all happened?

Bigg Boss had a captaincy task between Bani and Om Swami, in which they were supposed to make individual pyramids. Housemates were given the liberty of supporting the contestant whom they wished to see as the captain. Housemates supported Bani and in a bid to do this, they deliberately fell over Om Swami’s pyramid again and again. Due to this, he became pretty furious and had no option but to take such a ridiculous step. He collected his pee (urine) in a bowl and threw it on Bani’s face.

Housemates were irritated by this; Bani kicked him and Rohan Mehra slapped him right away. Even other housemates supported Bani and Rohan and demanded some serious action against Om Swami. And this time Bigg Boss did take an action on Om Swami. He has been kicked out of the house.

Finally the disgust and irritation has ended in the house! What’s your take on this? Do share your views in our comments section below.

10 Hot Pics Of Lopamudra Raut That Will Melt Your Heart! She’s Too Gorgeous…
Kaif Did A Q&A Session On Twitter & It Was Out Of The World! He’s Super Witty!