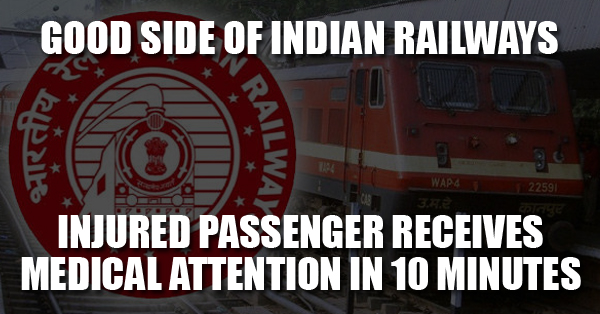 In & out we come across many incidents where Indian Railways are blamed for some of the other thing. Either it is for their poor food services or it is for the Railway website or many other problems faced by a common man who picks Railways as better means of transport. But what if I tell you that Every coin has two sides. Where Indian Railways are blamed every now and then for there services this particular Incident will force you to praise them.
This is an incident which occurred to Pankaj Sharma who posted on Facebook his experience with the Indian Railways. He writes that while he and his father were travelling from Chennai to Rameshwaram, his father was injured from the Side Berth. The matter was taken in hands by the attendant in charge immediately and he asked Pankaj to call up 138 in order to get medical help. But to Pankaj’s surprise a Medical team has reached them within 10 minutes on the next station. The team comprised of 4 Policemen, a doctor, and two other helping staff got on to the next station and assisted Pankaj’s father with all the necessary medication required. This didn’t end here. 2 Engineers got on to the train on the very next station and looked into the technical fault of the locking system of the side berth. Pankaj and others were happy to see such a great response from the Indian Railways and the doctor who didn’t even care to remove the helmet which he wore and treated his father.
Where every now and then we come across of some flaws in the Railway System, Such incidents forces us to believe that We are movie towards a Progressive System. Kuddos Indian Railways.

You Can’t Miss To Check Out This Review Of Baahubali
This Old Lady Is Compelled To Sell Chips Outside Haldirams To Earn Her Living- Can No One Help Her?