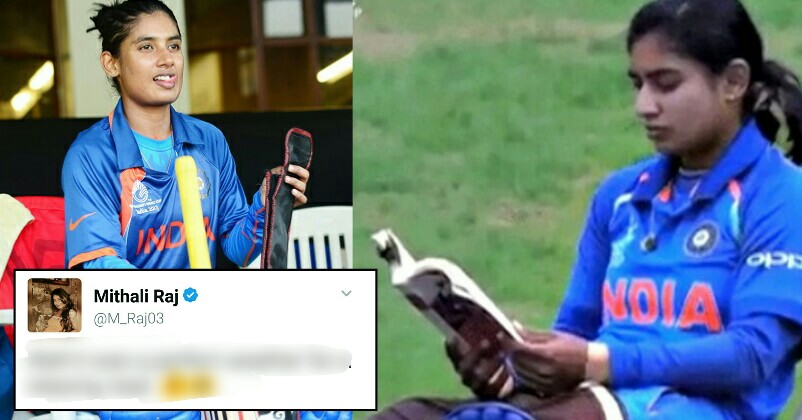 Many of us may not be aware but cricket World Cup tournament is being played now-a-days and India has won its first league match which was against England. Yes, you read it right! World Cup is going on but it’s women’s tournament and since women’s cricket is not much endorsed or popular in India, it won’t be a thing of surprise if a large mass doesn’t know about it. Mithali is a cool captain who doesn’t let anxiety or pressure overcome her. It was proved once again when she was waiting for her turn to bat in the India-England match.

Normally, a player waits anxiously looking at the ongoing match if he/she is the next to bat; however, Mithali chose to read a book while waiting for her turn which implicitly explains her cool quotient. This naturally made everyone curious and people had merely one question – Why was Mithali reading a book before going to bat?

Well, if the same question troubles you too; your wait is over as the captain herself took to Twitter to answer the perplexing query!

Yes! In a tweet, she answered as to what prompted her to read a book by Jalaluddin Rumi which was based on life essentials. She tweeted, “Well it was a perfect weather for a relaxing read.”

Well it was a perfect weather for a relaxing read. 😜😁 https://t.co/7IcOTOViob

On 29th June, Thursday, India will play against West Indies and we wish the team luck.