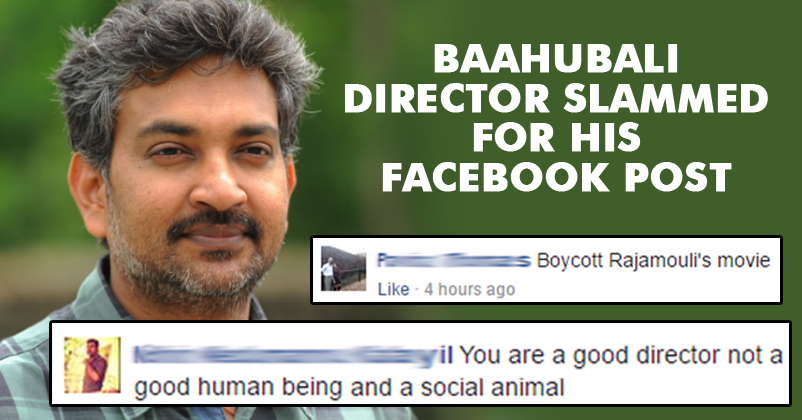 Just when Baahubali 2 is doing extraordinary business at Worldwide Box Office and getting huge appreciation all over, SS Rajamouli is being criticized on social media especially Facebook. A 5-year-old Facebook post by SS Rajamouli based on casteism has come in the eyes of people now for which he is being bashed left, right and center.

Here is what he posted –

“We learnt The Caste system from Manusmrithi was based on our lifestyle and not by birth. Mr.Prasad, A gentleman whom I play tennis with, told me a better expansion.
Panchama Jaathi(Untouchables) One who depends on others for his living.(Parasite)
Sudra One who lives for himself and his family.
Vysya One who makes profit for himself as well as for the person with whom he is trading with.
Kshatriya One who eats after the people under him have eaten.
Brahmin One who first learns and then teaches… SS Rajamouli via twitter (sic)”

It’s indeed shocking to discover such sentiments of a filmmaker whose art is acclaimed worldwide and who represents our country. But it’s been 5 years since the post. We believe his thoughts would’ve changed in this time period. Hope he makes a clarification soon. It is wrong on the part of people to come up with such old posts; is it right to troll him after 5 years and that too for something which he probably didn’t mean? Many a times it so happens that a person randomly shares thoughts which he has read/heard from somewhere and there are good chances that in case of SS Rajamouli too, something similar must have happened. Just because it’s related to a sensitive topic i.e. “Caste”, people have got an excuse to slam him.

Kajol Brutally Trolled On Social Media For Eating “Beef”! She Even Issued A Clarification Later!
One More Warning From North Korea! Says It Will Launch Attack Any Time & At Any Location!