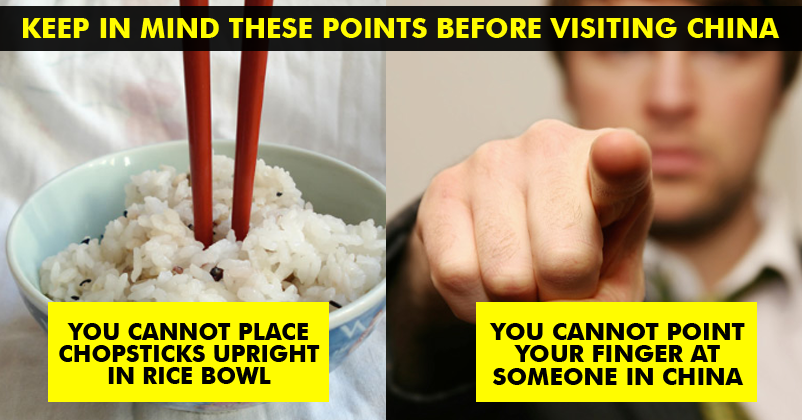 There are different customs of every place but, knowing them before visiting one is always beneficial. In a country like China where the customs are really strange, one needs to be fully prepared! Have a look at the 13 weird & shocking customs of China.

1. You could be used to tip the one who serves you food in your city but if you do the same in China, It is not considered polite. 2. ‘Tea Tapping’ is a tradition in China. The one who’s hosting would take no time to refill the tea in the cups and will not let them go empty; the one whose cup is getting filled has to tap the table to thank. 3. People do spit in public and that too very loudly and it isn’t considered rude. However, efforts are being made to reduce this practice. 4. In places with Tibetan people, pointing out finger is considered as rude. You shouldn’t point out with fingers; you can use your full hand. 5. This happens in India as well. People would not stop you from taking photographs with them; in public places, this practice is very common. 6. Split pants are used in China instead of diapers as they make things easier for kids. 7. In China, you can easily spot people sleeping in a bus, train, car or even on roads. This is because people are so busy with their works that they don’t get sufficient time for sleep. 8. The full face mask protects skin from sun and jellyfish. It is more famous because the chances of having a pale complexion are quite high. 9. According to Chinese authorities, the Geese have a great vision, loudness & aggressiveness and that’s the reason they’re used in place of guard dogs. 10. Accepting a compliment is considered to be feeling of excessive pride. So, people of China do refuse compliments; it’s very strange. 11. Leaving chopsticks upright in rice bowl reminds of a ritual i.e. offering food to the dead; hence, this should not be practiced. Do not ever do this while having chopsticks in hand. 12. Burping is considered as a compliment to the chef. 13. Even if the gift is desired, it will first be refused and then be accepted later on. It’s habitual to refuse every gift in China. Do share with your friends & let us know your views about the article in the comment section below.

Continue Reading
You may also like...
Related Topics:china, Chinese customs, Customs in china, Rituals in China

This Girl Accepted A Random Facebook Friend Request! What Happened Next Is So Amazing
Kashmiri Muslims Offer Prayers In A Shiv Temple On Mahashivratri. Urge The Pandits To Return Home