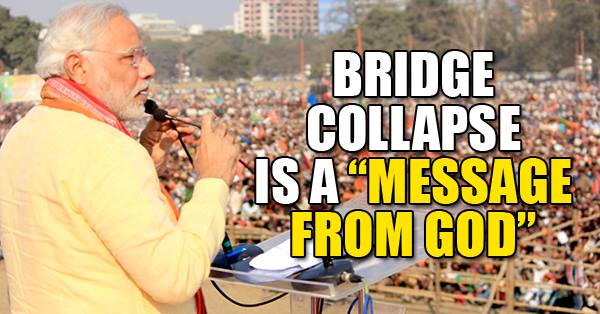 Indian Prime Minister Narendra Modi took a jibe at the Bengal chief minister Mamta Banerjee while he was addressing an election rally in Madarihat. He referred to the Kolkata flyover tragedy and said that it is “God’s message to people to save Bengal from the Trinamool Congress”.

As per the reports, 26 have lost their lives while 89 have been injured in the tragedy; the PM accused the CM of “shamelessly” doing politics over the dead bodies of the victims. PM Modi also said that whenever such an unfortunate incident takes place, the chief minister visits the location and “try to save people, assist in rescue work”, however the “first thing she (Ms Banerjee) did was to declare that it was the Left Front that gave the contract (for the project),… for Didi, it’s the chair which is only visible and not the dying people.” The PM further explains that the flyover tragedy is an act of God as “it happened during election time, so people may know what kind of government she has been running.” He further added, “God has sent a message to the people — that today this bridge has collapsed, tomorrow she will finish off entire Bengal.”

The PM continued with his attack in Asansol when he asked people about the full form of TMC; he himself told that, “T for Terror, M for Maut, C for corruption.”

What PM said was unbecoming of his high office, more like a Shakha Pramukh. My statement on FB LIVE #BengalPolls >> https://t.co/PzHHS6RUAF

He took to Facebook to deny the allegations levied by the PM and also said that the PM should not speak in such language, he wrote, “We expect you now to grow with your job.”

With elections going on in West Bengal, the opposition parties will try to take the maximum benefit of this tragedy.

Share your views with regard to it in the comments section below.

Guess What RCB Has Introduced For IPL Season 2016! You Are Surely Going To Love This!
These NIT Girls In Spite Of Rape And Murder Threat, Marched With A Tricolor!