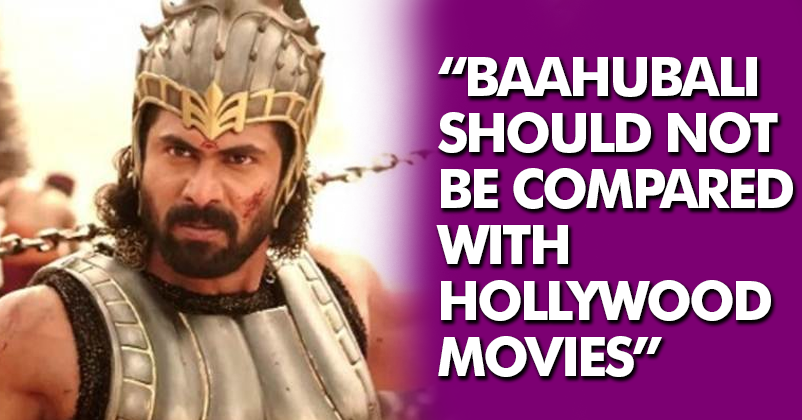 Baahubali was the first Telugu film to have a Pan India craze back in 2015. The film went on to become first 100 crores grosser from Telugu Industry in Hindi markets. All India and Worldwide business was huge.

When Baahubali 2 released this year, the expectations were sky high. The audience who had earlier got used to regular movie watching experience felt a sudden change in their expectations. Now the level that Baahubali had touched, only Baahubali 2 had to cross and it didn’t disappoint at all. Baahubali 2 with its extraordinary visuals, a story related to our own roots and the great storytelling managed to blow everyone’s mind. It was a totally fresh concept and experience for regular cine-goers but those who are fond of Hollywood films praised the grandeur by calling it “A Hollywood kind of Experience”.

Film’s lead antagonist Rana Daggubati has however rubbished all the comparisons of Baahubali to Hollywood films. During an Interview with HT, Rana who played the role of Bhallaldeva in film said-

“This was effectively a Telugu film that was dubbed in Multiple languages but we saw it together as a nation. We followed the old Indian way of storytelling. Nothing was inspired from the west or taken from the west. It is our tale.” “I learnt a lot as an actor and his sincerity towards storytelling is something i really appreciate.”

“We set out to make a big war film. We spent far more than a regular regional or national movie would. So we need the right parents – be it in Hindi, Tamil or Malayalam. And Karan has been a great business partner. It was Karan who I first brought the film to. He knew what we were making and positioned the film really well. The results are for us to see as well. The film in its Hindi dubbed version alone has crossed the Rs 500 crore mark.”

Well, we agree that Baahubali is totally different from Hollywood films. The film is made in India, the story is related to our roots and culture and the way SS Rajamouli has narrated it is out of this world. Comparing it with any Hollywood film will be the insult of Rajamouli’s craft and every member of the team who put their best foot forward for the accomplishment of this cinematic legend. What do you say?

Most Awaited Game Of Thrones’ Official Trailer Is Finally Out! It Has Broken The Internet!
Sunil Grover’s Live Show In Ahmedabad Cancelled! The Reason Will Break Your Heart