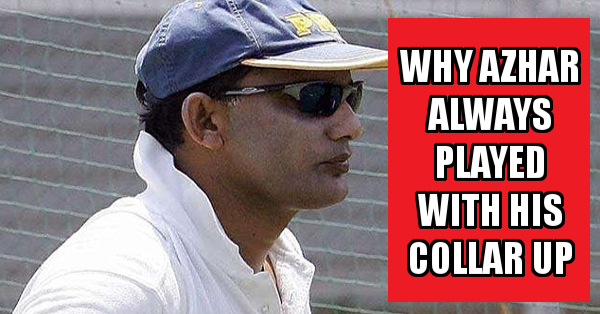 Mohd. Azharuddin is undoubtedly counted among excellent as well as the most successful Indian skippers regardless of controversies he has been surrounded with! The cricketer was leading team India during 1990s and besides commanding the team on field, Azhar boasted composed and cool temperament which is very necessary to handle pressure situations.

One trademark by which cricket lovers recall Azharuddin even today was the cricketer’s wristy leg-side flicks which were one of a kind then. He exhibited style by means of batting and had also been a great performer during the match. In fact, he had been among the most excellent fielders for Indian slip cordon.

How he carried his personality in the course of a match showed the outstanding way with which the cricketer upheld his own style whether it was during a match or off the field. Especially his collar-up look is something which none of his fans can ever forget.

A number of people who had seen Azhar playing with his collar up might come to the conclusion of his arrogance owing to this gesture but the cricketer himself disclosed why he used to do it actually to Fever 104 FM, a radio channel.

In the words of Azhar, “While fielding at point, I used to have problems in my neck skin because of the exposure to the sun. Hence, I decided to raise my collar as protection and it became a habit.” However, this is not the reason which has been shown in his biopic “Azhar” starring Emraan Hashmi. In the movie, Sangeeta Bijlani, his girlfriend, lifts his collar up in one scene while in another, his wife lowers it.

Well, aside from this particular habit, the former skipper of Indian cricket team also talked about the reason of his wearing a white helmet during the matches. Just to inform, helmets hadn’t been compulsory at that time, in fact rare, and Azharuddin used to wear a white helmet which was one more quirk on his part.

The cricketer stated, “I had a liking for white helmet since we used it a lot during playing Tests. And since there was no compulsion of using a blue helmet, I played with a white one.”

Former Mumbai Police Commissioner Rakesh Maria Reveals Truth About Azhar, Calls Him The Biggest Match Fixer
2nd Std Kid Can Solve This Puzzle But You Can’t! Be Ready To Pluck Hair Out After Knowing Answer