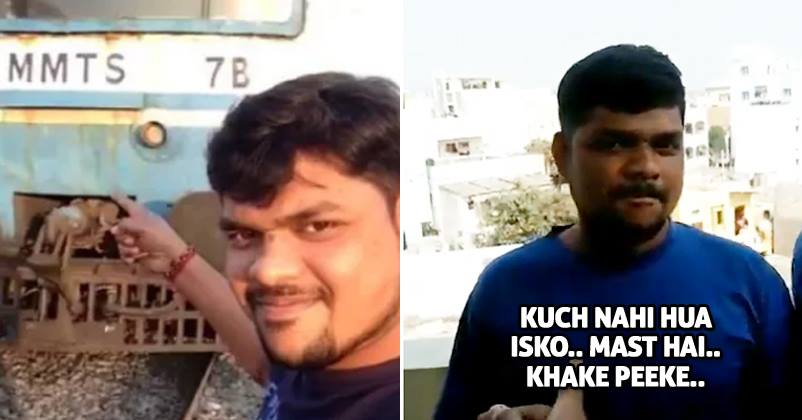 Few days back, a video had surfaced online and we were shocked to see it. In the video, we could see a guy clicking a selfie at Borabanda MMTS station; soon, we saw a train running over him. in no time, the video went viral over the internet and we were heartbroken to see how carelessness led to such a big accident.

It was reported that he suffered from serious injuries to his brain as the train knocked him down. We could see these headlines on almost all the news sources.

After watching the video, the issue of selfie deaths was highlighted once again.

This is the video shared by one of his friends;

However, we would like to tell you the truth behind this viral video. Well, this guy identified as Shiva from Telangana is completely safe. The video was nothing but a PRANK.

5 days after the selfie video, his friends shared one more clip in which he is seen to be totally healthy without any injury. Yes, Shiva was never hit by the train. In fact, he used some amazing graphics to make it appear like real. Fresh reports by ABN Telugu say that the entire video was planned, just to fool everyone.

Here’s the video that his friends shared; they call it a miracle, but in reality it was a prank.

Now that's what I call a miracle !! The stupid Selfie man hit by speeding train is doing fine with no visible or serious injuries. #Hyderabad pic.twitter.com/I7aYWUFnzX

Social media were in a state of shock when that selfie video was circulated all over. We are happy to know that nothing has happened to him and he’s safe. However, one must think twice before uploading such pranks on social media as they may have a wrong influence.

Reports also say that he has been arrested. As of now, there’s no clear picture. We shall keep you updated.

Continue Reading
You may also like...
Related Topics:Hyderabad, Selfie, Video