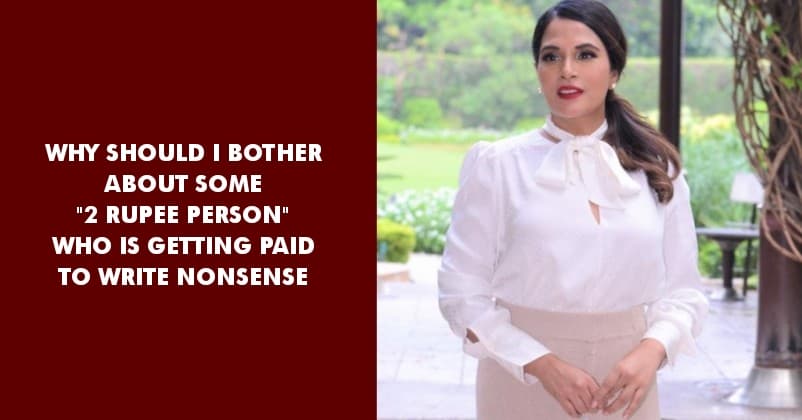 One of the most versatile and talented Bollywood actress Richa Chadha is known for her rough words. She does not like to sugarcoat when it comes to trollers or slammers.

Her movie Section 375 released just a day ago and people loving her bold character as a ruthless lawyer. But many times she has been trolled for her bold avatars. In a recent interview, she talked about these trollers and called them “2 rupee people”.

Richa revealed that she doesn’t give a damn about these trollers. She asked why should she bother about some 2 rupee person who’s getting paid to write nonsense about people that they can’t reach otherwise. She even called them attention-seeking jerk and too ugly to put up their face, too coward to put up their real name.

Most underrated actor ever… and a gem, a true professional, a secure costar and a pleasure to work with ! Press Conference #Section375 . . . #AkshayeKhanna #SGSAIFF2019

Her recently released movie Section 375 not only garnered appreciation but also got trollers attention. One man even filed a petition against the filmmakers for showing lawyers in a bad light. When asked about the same to Richa, she said, “They should watch the film before they comment.”

Talking about her role in Section 375 she said that it is the juiciest role she has had in her career. As an actor, she loved the material she was constantly looking for.

Richa as always slayed the trollers once again in the sassiest way possible.

British Brand Selling Indian Kurtis As “Boho Dress”, Desi Twitter Is Not At All Impressed
8 Bollywood Films Which Are Inspired By South Korean Movies