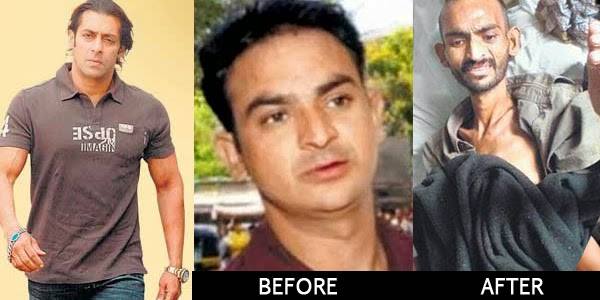 If you have a soft corner for Salman Khan, you must read the tale of Ravindra Patil, his bodyguard who was also a prime witness in the hit and run case. It’s highly creditable on his part that he did not change his statement till he breath his last and even demise could not stop him from speaking what he considers as truth.

It’s utterly sad that Patil was actually thought to be a “Human Being” lastly at the moment when he suffered from drug-resistant tuberculosis strain and death was approaching him. He was lying alone on cold floor of a Municipal hospital, coughing out few remaining breaths. As far as his family members are concerned, they had already detached themselves from him to such an extent that none of them came for claiming or collecting his body.

On seeing Ravindra’s before & after image, anyone can easily guess that he had undergone great torture. Naturally enough, this is simply not we ever anticipate an Ex- police official to be.

If we go back in time to the initial days of 2002, memories recall us of the incident when Mr. Khan lodged a complaint in relation to menacing and bullying calls that he got from the underworld. As the conclusion made by cop, Salman’s life was at risk and hence, Ravindra Patil, a constable aged 24 had been appointed as his unarmed bodyguard who would be with him like his shadow.

On September 28, 2002, Patil was waiting outside Juhu’s JW Mariott hotel where Salman was indulged in drinking. What happened then is known to all – drunken Mr. Khan ran his car over road dwellers.

He simply refused any charge the subsequent day as soon as he was detained and Ravindra recounted noticing Khan quite shocked on account of people moaning and lamenting under the wheels of his SUV. As an outcome, he ran away from the place rather than hospitalizing victims.

Ravindra was the merely witness who saw this whole incident happening and took the decision of Salman’s destiny. It was alone he who was fully aware of whether Salman was in a drunken state, driving rashly or given a warning for slowing down the speed. As we all know, each of these was correct and not a lame charge against Salman; however, he refused to accept either. Other witnesses related to the case changed statements and it was merely Patil who remained unmoved from his statement in spite of facing great pressure from the lawyers of Khan.

It was in the year 2007 that Patil was seen on Mumbai streets, stricken by tuberculosis for more than two years. Patil’s family, media, cop or even the most generous and benign Bollywood celeb, i.e., Salman himself seemed to have forgotten this bodyguard.

Revealed: What Will Salman Khan Do In These 2-Days Of Bail Out?
Meet This Hit And Run Survivor Who Would Change Perception Of Salman’s Fans