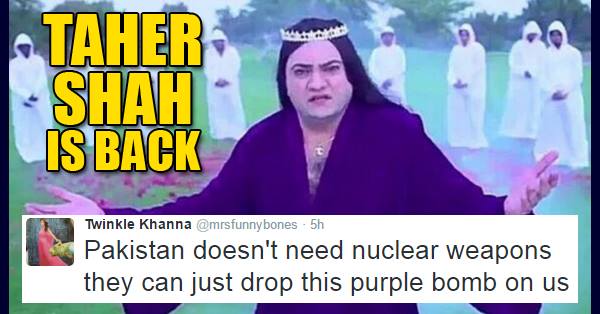 In 2013, a Pakistani broke the Internet and became a sensation after people watched his video which was named ‘Eye To Eye’; however, he got name and fame for all the wrong reasons! Yes, you read it right! His song was not at all liked by people; on the contrary, it was so bad that it gained immense popularity.

After that not only his countrymen but people from other countries were also talking about him and wondering how someone can sing like this, even our own Bajirao Ranveer Singh could not control himself and made a dubsmash of it.

The same Pakistani singer Taher Shah is back with his new track named “Angel” and once again, he is breaking the Internet and the reason is pretty same as it was for the first track. Moreover, this time, actress Twinkle Khanna, Akshay Kumar’s wife is not able to resist her urge of tweeting more and more about this song.

Twitter Is Flooded With Super Hilarious Reactions Over Taher’s “Angel” & You Just Can’t Miss To Check Even A Single Tweet:

Pak has one weapon which is more dangerous than the nuclear bomb:

..and the World thought that only dangerous thing Pakistan possesses is a Nuclear weapon. #TaherShah #TahirShahAngel pic.twitter.com/fOBFBkVc1r

Raina punished by Kohli for showing him this video:

That moment when you can't figure out if the person holding you is male or female…#TaherShah pic.twitter.com/c3FojYvucN

Condition of people before and after watching the video:

After watching the new video of Taher Shah, people be like:

This Singer is better than Taher Shah:

This is a very scary picture. I hope the authorities have rescued the child. pic.twitter.com/DqDWD0zu72#TaherShah

Condition of Baba Ramdev after watching video of #TaherShah . pic.twitter.com/y0X3FTF6bn

This one is epic:

Pakistan doesn't need nuclear weapons they can just drop this purple bomb on us #TaherShah pic.twitter.com/uSo2LfDF7s

When you see eye to eye with an Angel and discover you have contracted conjunctivitis #TaherShah #LastOneForTheDay pic.twitter.com/cSfnvq3mAo

If Pak has Taher, we have MSG

Don’t forget to share your views about this new video of Taher Shah in the comments section below.