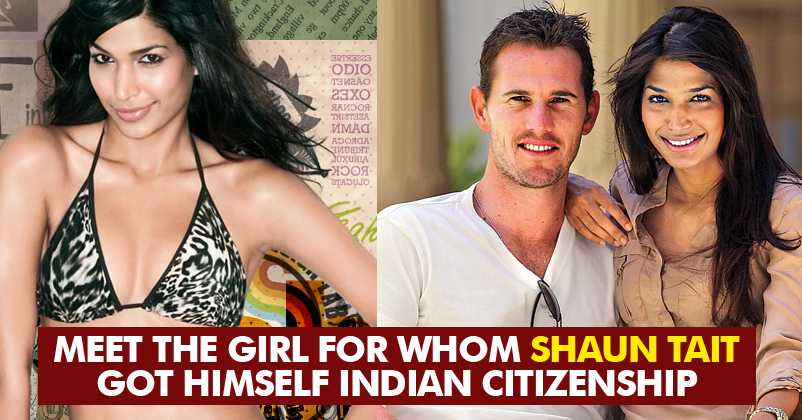 We all are witnessing the nail-biting cricket war between India and Australia. As the finale happens in Dharamshala, an Australian cricketer announces himself as the newest Indian.

Curious? Well, its Australian cricketer Shaun Tait who has become an Overseas Citizen Of India (OCI). This news made all the Indian overjoyed with excitement but many of them don’t know the actual reason behind it.

The reason is Shaun Tait’s marriage Mashoom Singha. Shaun and Mashoom were in a relationship for more than 3 years post which they tied the knot in the year 2014. The two started dating in the year 2010 when Shaun was in India for Indian Premier League (IPL), he was playing with the team Rajasthan Royals.

Mashoom Singha is still a mystery to all of us. We don’t really know much about her. She is a swimsuit model, she had featured on Kingfisher swimsuit calendar in the year 2005. Not just a good looking face, she is also a wine marketer. She is the beauty with brains personified. It was Shaun Tait who proposed Mashoom in the year 2013 in Paris. They then tied the knot in the year 2014. Famous Indian cricketers Yuvraj Singh and Zaheer Khan also attended their wedding. Mashoom and Shaun Tait own the Hotel Elliot in Fleurieu Peninsula, near Adelaide. Mashoom’s sister Shamita is also a model, who was crowned Femina Miss Earth 2001.

Have a look at her pics:- We wish them best of luck!

Footballer Wished Mom On B’day! Comments Prove Why FB Users Are Shareef & Twitterati Are Kameenas
Man Found Cockroaches In Fridge Of CCD Jaipur. When He Pointed Out, He Got Slapped By Lady Staff