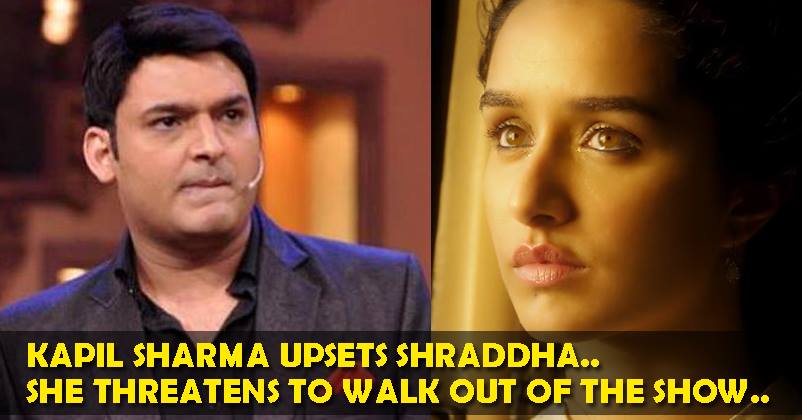 The Kapil Sharma Show is the favourite of every celebrity as it is followed by millions of people in India and there is none other great platform as Kapli Sharma’s show for the promotion of Bollywood movies.

Kapil Sharma had some issues in the past with colors channel, as a result Kapil left the channel and started a new show on Sony TV. Krushna was given the new show called “Comedy Nights Bachao” by colors. But it didn’t work well. As most of the celebrities don’t like Krushna’s show because of insulting and bad jokes. Kapil Sharma’s show is the first choice of celebrities because there is no inclusion of personal comments and insulting jokes. But this time an incident happened on the sets of Kapil’s show after which Shraddha Kapoor got very angry and even threatened Kapil to walk-out from the show.

Shraddha Kapoor and Aditya Roy Kapoor went to Kapil’s show for promoting their upcoming movie “Ok Jaanu”. They arrived at the sets at 4 PM, but there were no signs of shooting. Nobody was present there and Shraddha and Aditya had to wait for 5 long hours. They first kept patience, but Kapil didn’t arrive at the sets for 5 hours. After waiting for 5 hours, Shraddha lost her cool and threatened to walk-out from the show.

The crew somehow managed to cool her down and shoot finally started at 9 pm and went on till midnight.

Not Lopa, But These 2 Contestants Will Fight For The Ticket To Finale! Check Out!
Troubles Surface For Raees Once Again & This Time It’s Due To Shiv Sena!