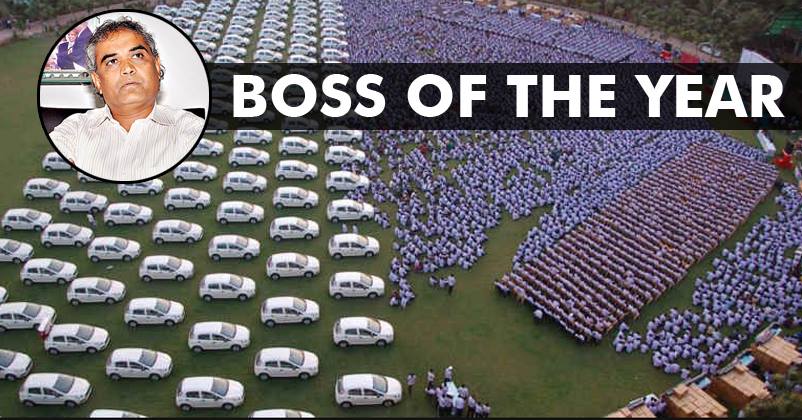 Employee satisfaction holds equal importance as customer satisfaction and it seems that Savji Dholakia, billionaire diamond merchant from Surat and the owner of Hare Krishna Exports, completely understands it.

Hare Krishna Exports deals in diamonds and textiles and this year, the company has gifted 1,260 cars and 400 flats to its employees as Diwali bonuses. Wonderful, isn’t it? The firm is celebrating its golden jubilee and has spent nearly Rs. 51 crore on Diwali bonuses for 1,716 employees who have been named as the best performers. The announcement regarding the bonuses was made on Tuesday in an informal meeting. Last year also, the company gifted 200 flats and 491 cars as Diwali bonuses while the year before that, a whopping amount of Rs. 50 crore was spent on the performance incentives. The company has nearly 5,500 employees and its annual turnover is Rs. 6,000 crore. The 400 employees who will be gifted flats won’t have to pay the down-payment, as the company is going to pay for them. Not only this, it will also pay Rs. 5,000 as monthly installment for 5 years, for the housing loan taken for these houses. The respect and love that Savji Dholakia commands can be understood by the fact that he is called Savjikaka in Surat and Saurashtra.

Savji hails from Dudhala village and he started diamond business with the help of a loan that he took from his uncle. Just to make you remember, Savji is the same person who sent his son, Dravya, to work in Kochi with three pair of clothes and just Rs. 7,000 so that he can understand the value of money. I’m sure you must be wishing to have been one of the fortunate employees of Hare Krishna Exports who have got Diwali bonuses and why not, who doesn’t want progress and success!!

Forget Stamps Or Coins, This Man Collects Ferraris For A Hobby! His Collection Will Make You Jealous!
Cracker Boxes With Covers Of Surgical Strikes & Politicians’ Names Superhit Among Buyers