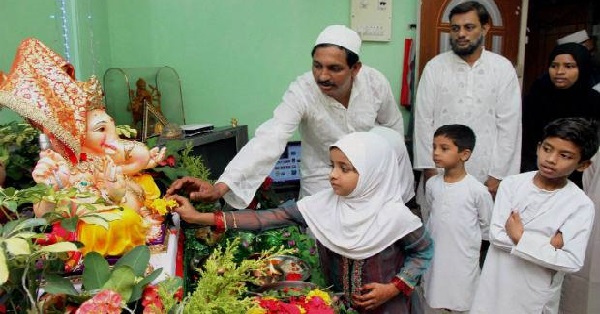 Quite often, we come across incidents which find their basis on religion and creed. At the same time, there will be nothing new if some riot takes place between Hindus and Muslims on account of religion because this is what we have seen for long and they grew to such an extent that any incident of this type does not surprise or shock us now. This is so because people have become very much used to of it in view of the fact that this discrimination has been injected in their roots!!

But in this article, we present you 10 pictures of Ganesh Chaturthi which will make you believe on humanity which is above and beyond being Hindu or Muslim. The festival of Ganesh Chaturthi marks the birthday of Lord Ganesha and celebrated with great passion and zeal in India. These photos are of Mumbai which showcase how Hindu as well as Muslims took part in celebrating the holy festival without any trace of religion difference. And this is what all of us should learn from these people; the religion of humanity since we are a human first and Hindu or Muslim or Sikh or Christian later. If the whole world starts thinking like this, there won’t be anything like terrorism, riot, discrimination etc. which are the biggest enemies of humanity.

Take a look at these 10 pictures of Ganesh Chaturthi which are an answer to all religious riots: EPIC Fail From Microsoft’s Cortana During A Live Demo By Satya Nadella..!!
17 Types Of Lord Ganesha You Will Find This Year Around India