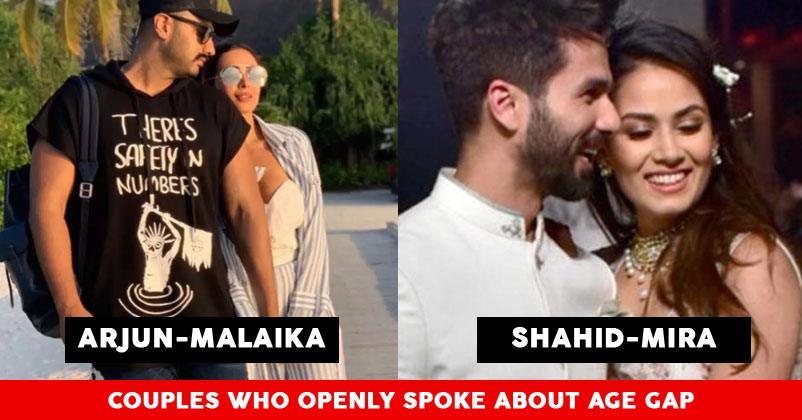 We are living in the 21st century but still, it is a big deal when a couple does not live up to the expectations set up by society. One of the big issues often acknowledged when two people come into a relationship is the age difference. 4-5 years difference between a man and his wife is ideal, anything above that is considered wrong. And if the celebrities chose someone much elder or much younger than themselves, they often have to face public wrath.

But these celebrity couples have time and again proved that age difference doesn’t matter if your lobe is true. They were not only candid about the fact, but they also carried it with grace and shut the trollers up whenever needed.

When Bollywood’s desi girl Priyanka Chopra opened up about her relationship with her Hollywood singer boyfriend Nick Jonas, fans slammed her on social media. But despite the public wrath she stood for her love and went on to marry Nick in a grand wedding in Udaipur last year. The couple has 10 years age difference and Priyanka is the older one.

Kareena and Saif met on a movie set and fell in love. When these two came out about their relation people laughed at them as Kareena is 12 years younger to Saif. But that didn’t stop them and now they are happily married with a cute son Taimur.

This love is no longer the same. Its growing deeper. Happy birthday dear Saifu ❤❤❤❤

Milind and Ankita had 26 years age difference between them but their love sets an example that age gap doesn’t matter when you are in love. Trollers keep on trolling but these two ignore everyone and shower love on each other and flaunt it on their social media handles. Recently they shot for an ad, which again invited slamming and trolling. One troller even commented that “Ankita should call him Papaji.” Reading the comment, Milind winking at his wife, said, “She does, sometimes.”

JAMBO people !!!!!!!!!! What an amazingly beautiful 28th birthday for my #superwife @ankita_earthy and what a way to begin your 29th year, reaching #Uhuru peak, at 19,341ft, the highest point of Mt #kilimanjaro, the roof of Africa !!! And, I think, one of the first Assamese women to do so 😋😋😋 so proud of you sweetheart 🌝 You will inspire many more ! I wish you always greater heights, greater love, greater happiness ❤ #HONGERA MALKIA !! #30thaugust2019 #LateBirthdayPost 😊 #africa #alwaysandforever 📷 Fredy

Arjun and Malaika came out about their relationship soon after the latter’s divorce with Arbaaz Khan. As soon as they announced it, their 9 years age gap became the topic of jokes and trolling on social media. In a recent interview, Arjun revealed that though people keep on pointing out their age difference, he doesn’t care and doesn’t get affected by it.

That’s how love grows stronger when you have the world to show that you have something worth fighting for.

Cameron Discloses His Biggest Fear For “Avatar 2” & How “Avengers: Endgame” Helps Him Get Rid Of It
Vin Diesel and Dwayne Johnson’s Tribute To Paul Walker Gets Netizens Emotional