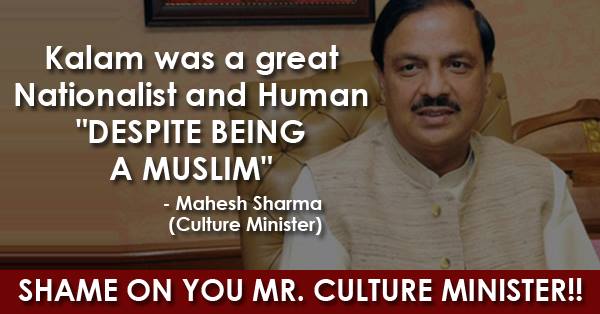 There have not been many days when Culture Minister of India talked about “cultural pollution” that went viral over the Internet and social media for which Mahesh Sharma, the minister, had apparently been criticized too. Previously, he made a statement in which he said that “girls night out is against Indian culture” as well as described 5 points which sum it up. Now here we present a video wherein he has been caught in another controversy by saying that Abdul Kalam was a great nationalist and human “despite being a Muslim”. Must watch this interview video and his statement at the end of the video which would shock you to the core as how can he say this being the Culture Minister of the country.

What is your opinion after watching the video? Share your views in the comments section below.

This Man Is The Living Proof Why You Should Not Inject Fake Muscles
EPIC Fail From Microsoft’s Cortana During A Live Demo By Satya Nadella..!!