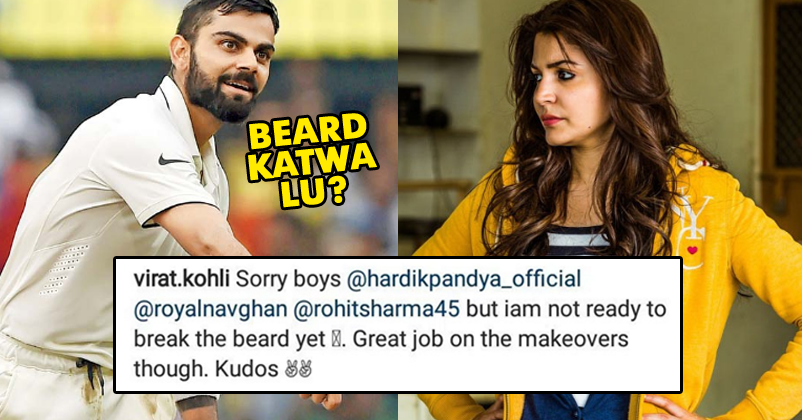 Virat Kohli and Anushka Sharma are the couple goals every single time. Though they don’t express love so openly but when they do, it is adorable.

We all know that girlfriends have a major say when their boyfriend thinks of anything related to fashion or style.

All the girls are pretty dominating and possessive about that particular space. Looks like Anushka Sharma is same like any other girl.

Virat Kohli posted a photo and revealed to his friends that the trend #BreakTheBeard is amazing but he can’t join the league.

Virat captioned the image: “Sorry boys, but I am not ready to break the beard yet. Great job on the makeovers though. Kudos.”

Sorry boys @hardikpandya_official @royalnavghan @rohitsharma45 but iam not ready to break the beard yet 🤓. Great job on the makeovers though. Kudos ✌️✌️

To which Anushka Sharma had a rather stern reply – YOU CANNOT! Virat Kohli was an obliging boyfriend and just like any other boyfriend he too did not over rule Anushka Sharma!

If you all don’t know, BreakTheBeard is the new trend and we even posted how Ravindra Jadeja underwent a beard makeover to change the game on the field.

Change the game on the field. Change the look in the dressing room. #BreakTheBeard #rajputboy #newlook #timeforchange #vivoipl #glvsrcb

Can this get cuter? Well, we so much relate to both. Virat somehow knew that his beard is something Anushka really loves.

We wish that these two keep loving PDA’s coming in on the social media.