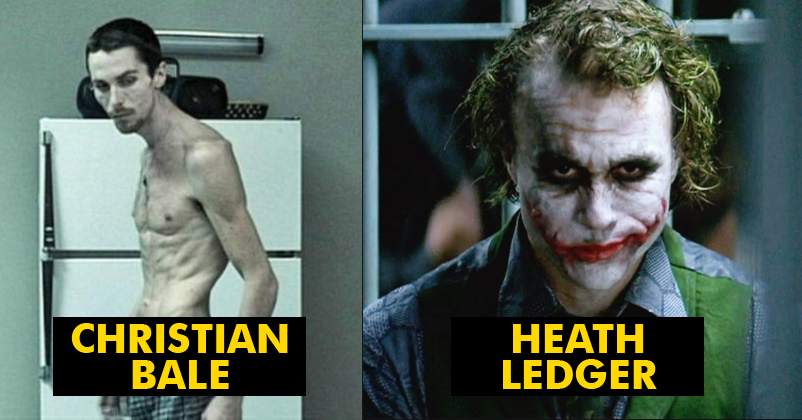 Every great story requires a great actor who can justify it. Being an actor isn’t simply uttering some lines in front of the camera and doing expressions which are written in the script. It’s about living the role, going deep, losing yourself, forgetting yourself, and taking up the identity of the character that you’re playing. Acting isn’t an easy profession, it requires a lot of dedication and sacrifices. Some actors take their role very seriously and the sacrifices they do for their role may surprise you. From losing an excess amount of weight to locking yourself in a reclusive state, it’s just way too extreme. All this so that you can sit up and watch the movie to really notice the character.

So if you think your job is hard and acting is the most simplest job, then after reading this you’ll change your mind. So here are the 10 Actors Who Went Too Far For Their Role.

For his role in ‘The Machinist’, Christian Bale lost 62 pounds and weighed around 120 pounds only. He achieved this ghoul like appearing physique by a daily diet of black coffee, a can of tuna, an apple, and a pack of cigarettes to suppress his appetite. He wanted to lose an extra five pounds before filming, but the production staff and the doctors didn’t let him. Heath Ledger’s Joker was his career-defining performance and the role earned him an Oscar. To prepare for his role, to understand the dark character of the clown prince of crime. Ledger locked himself in a hotel room for a month, broke his ties with his friends and outside world, opting to research and redefine the character in his own way. Adrien Brody played the role of a Jewish piano player who struggles to survive the destruction of WWII. To prepare for this role he put himself on a strict diet of a couple boiled eggs, a small piece of fish or chicken, and some steamed vegetables. He even sold his car and his apartment, he moved to Europe with his two bags and a keyboard. To play the role of a paralyzed World War II vet, Brando lived among the paraplegics for months. During his stay at the hospital, very few of the staff were aware of his real identity. At the hospital, he learned how to lift himself out of his bed using only his arms, what it means to be a paralytic. Hanks gained 50 pounds (23 kg) before the production of the film to make him look like a pudgy, middle-aged man. He then lost 55 pounds and grow out his hair to look like somebody who had been living on an island. Hanks received an Academy Award nomination and won a Golden Globe for the part. Throughout the filming period, Phoenix remained in character for public appearances, giving many the impression that he retired from the acting career. Everyone thought he had lost it. He proclaimed that he’d becoming a rapper. But in the end it turned out that it was all an act. Nicholas Cage, who’s Known for his over-the-top performances, but this here is an exception. To play the character of a disfigured Vietnam veteran in the 1984 drama ‘Birdy’, Cage had four of his teeth pulled out just to get the feel of the character. Crazy, right? But his dedication for the role is undeniable. 9. Daniel Day-Lewis – All of his Movies

The only actor to have won three Academy Awards for the Best Actor category. For his role in ‘My Left Foot’, Lewis spent most of his time in a wheelchair. He refused to leave the wheelchair, as he felt it would break the character. Lewis even damaged two ribs from sitting too long. He did win an Oscar for the role. For ‘Gangs of New York’, he even refused to take medication for diagnosed pneumonia because he believed that treatment was not available during the time-period when the film happened. Chintuji Passed A Sexist Remark On Mrs.Clinton! Twitterati Got Too Furious On Him!
OMG! These 7 Blockbuster Bollywood Movies Were REJECTED By Salman Khan!