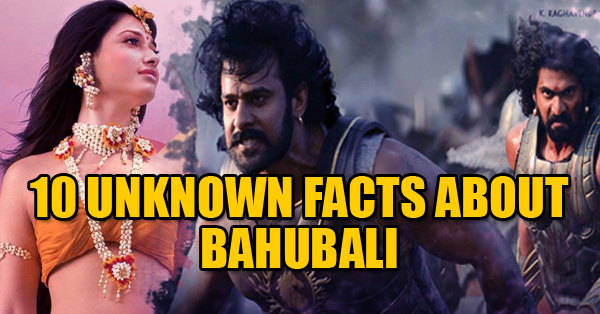 Bahubali the most awaited movie of the year 2015 has finally hit the theaters today on 10th July. This movie from the south has been so much in the news that the movie was very much awaited for the release worldwide. Bahubali is the most expensive movie in the history of Indian Cinema and expected to be the biggest hits of all times too. But did you these 10 things about the Movie? These facts relating to Bahubali and its cast will amaze you. Have a look at them:

1) Bahubali is the most expensive Movie in the history of Indian Cinemas with an approx budget of Rs 250 Crores and the movie is released in around 4000 Screens worldwide. 2) Movie has over 4500 VFX shots which is the highest for any Indian film. 4) Bahubali is the only movie which was on BBC’s Documentary on 100 years of Bollywood. The movie became the first to be a part of the documentary prior to its release. 5) Around 800 People worked for the Art & design and several VFX Shots in the movie. 6) The actor in the movie Prabhas & Rana on the directions of the Director Rajamouli had to gain weight and surpass 100 Kilograms each which they achieved after months of training and extreme workouts. 7) There was a strict diet plan for the leads of the movie Prabhas & Rana. As they had to gain weight they had to go for 6-7 meals a day, every meal included Rice & Non-vegetarian food. 8) The movie even broke the tradition of Building sets. Usually the sets in the movies are of 24 foot high but to achieve perfect flawless shots Director decided to surpass the limit and build the set to about 40-45 foot high. 9) Movie Lead Prabhas pertaining to his high calorie diet had to go for 40 boiled eggs in his breakfast. 10)The movie Bahubali was shot for around 400 days.

Looking at the great response from the viewers, the movie is estimated to be the greatest hits of all times in entire Indian cinema. We wish S.S. Rajamouli & entire team of Bahubali great Success.