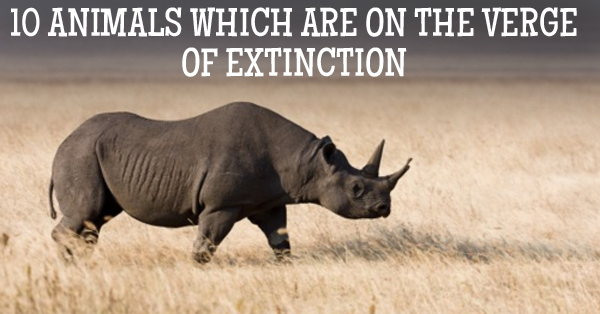 Horns of Black Rhinoceros are extremely useful due to its medicinal properties and they are also used as jewelry. Among the four Black rhino subspecies, the West African is the most threatened and may have already gone extinct in the wild. Chinese alligator are also known as mini alligator which are actually heavier than 40 kilograms. Experts have concluded that there are only 100-200 alligators left in the world. Pied Tamarin is also known as bare faced tamarind because of its hairless face and ears. The number of Pied Tamarin has dropped down by 70%. You would be surprised to know that only 50 to 100 of Sheath-Tailed Bat are left in the world. These furry mammals are found only in Seychelles and the government is monitoring them closely. 80% of Dama Gazelle has already extinct and this is majority due to hunting and habitant destruction. Northern Hairy-Nosed Wombat are small in size but weight as heavy as 40 kilograms. It is believed that there are only 100 of them existing in the world. Iberian Lynx is the world’s most endangered cat species which is commonly found in Spain, Portugal and southern France. Continue Reading
You may also like...
Related Topics:10 Animals That Are At The Verge Of Extinction And You Never Knew They Ever Existed!

Is Arjun Kapoor The Reason Behind Arbaaz & Malaika Split?
10 Facts About Black Holes You Didn’t Know