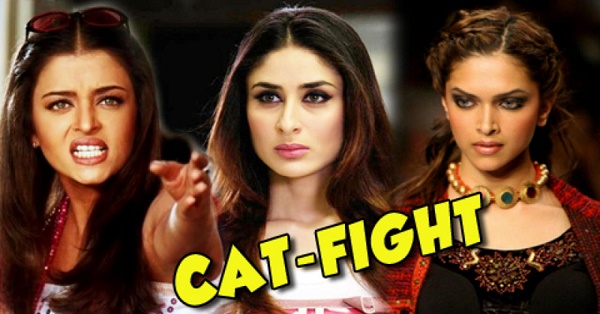 Bollywood news, gossips, breakup and linkups have always intrigued us. There is a popular saying two actress cannot be friends and rumours have always rife about catfights between the Bollywood celebrities. We got a list of 10 famous catfights in Bollywood.

Everything was fine between the two friends till Amisha had replaced bebo in her movie ‘Kaho Na Pyaar Hai’. Till date both the Bollywood divas don’t talk to each other. Fashion movie created a rift between both the Queens. They both chased each other claiming who was actually leading the movie, Priyanka or Kangana? Bipasha thought Katrina was close to John Abram during the shot of New York. At that time, Bipasha and John were dating each other. They both were best friends until Rani Mukherjee replaced Aishwarya in the movie “Chalte Chalte”. Ranveer Kapoor is the obvious reason to create a difference between the two successful divas. Sonakshi Sinha recently replaced Katrina in many brand endorsement and advertisement. However after which Sonakshi texted Katrina stating her apologies but Katrina never replied to her back. Both the actresses share same makeup man and this was the reason of cat fight between the both. After the movie Aitraaz reached the silver screens Kareena was not comfortable because Priyanka Chopra was appreciated more. Kareena kapoor fought with Anushka Sharma because of hiring her stylist without her permission. Hope you all enjoyed the post and we hope these celebrities patch up one fine day.