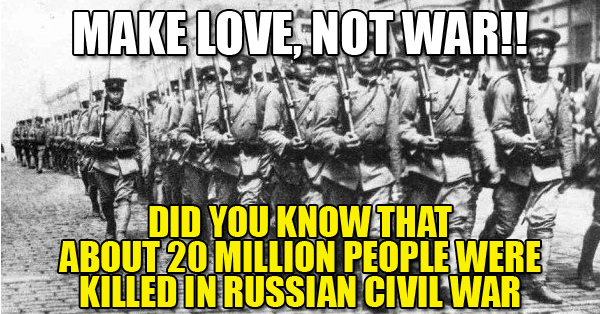 Wars have been fought for a variety of reasons including land, power, honor, freedom, and religion. And although many wars are certainly remembered for their influence on the course of history, their most painful memory is always the cost to human life. World War II escalated when the German Nazis invaded Poland. This time the two camps were made up of the Allies and the Axis. Between bloody beach invasions, concentration camps, and nuclear weapons World War II is often considered the bloodiest war in history. The First World War was triggered when Gavrilo Princip, a Yugoslav nationalist, assassinated the Arch Duke of Austria, Franz Ferdinand. The Great War was formed due to the alliances of world powers, and since they also have colonies, they were all drawn into the war. The battles were fought between the Allies and the Central powers. The Russian civil war was caused by a series of events that led to the execution of Nicolas II, the last Russian Tsar, and his entire family by the Bolsheviks. The death toll at the end of the war reached 20 million. 5. The Conquests of Timur

Timur was a conqueror in Central and Western Asia who only wanted one thing…power. He waged war and founded the Timuri Empire and the Timurid dynasty and was behind the massacre of 100,000 people in Delhi and 90,000 people in Baghdad. In total, his campaigns cost approximately 15 million people their lives. When Abraham Lincoln won the presidential election in 1860, he opposed the expansion of slavery into the territories and proposed its abolition. The civil war was fought between the Union of the North states and the Confederacy of the South. This rebellion was led by Hong Xiuquan who was opposed to the  Manchu led Qing Dynasty. After 15 years of rebellion, Xiuquan was finally defeated but left 20 million casualties in his wake. 8. The Conquests of the Ming Dynasty

Though recognized as one of the greatest and most established dynasties in history, the Ming Dynasty was conquered when a Manchurian leader named Nurchaci seized control of the Manchurian tribes in China and demanded the dynasty to pay him tribute. The battles between the two cost the lives of 25 million people. 9. The Battle of Kalinga by the Mauryan Empire

The battle of Kalinga is one of the largest battles ever to be fought on the Indian subcontinent. It was between Ashoka the Great of the Mauryan Empire and the feudal republic of Kalinga which was defeated due to Ashoka’s brutal strength. Interestingly enough, however, the brutality of the bloodshed led Ashoka to Buddhism. 10. The Wars of Alexander the Great

King Alexander III of Macedon was considered one of the greatest military commanders of all time as he was undefeated in the battle. At the time of his death, he had conquered most of the known world for Greece and left millions of casualties behind.

These 10 Sleeping Positions Tells Lot About Your Relationship!! Check Now!!
5 Bollywood Celebrities Who Did Not Even Make It To 11th Standard