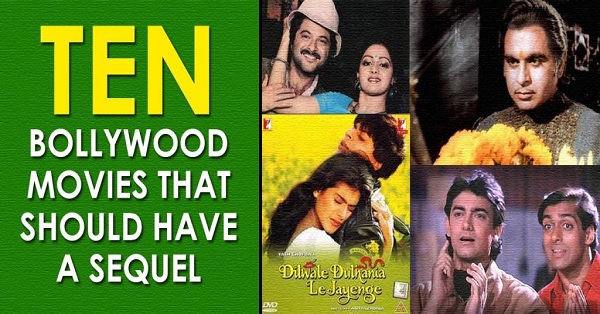 Sequels are a tricky thing. From the Producer’s point of view, sequels guarantee business since the people who enjoyed the previous part are bound to come back and watch. However, the whole idea of sequels has been seriously hurt by some needless ones which were worse than their previous versions.Here are 10 such movies which should have a sequel since it would make for some great viewing!

We’d pay any amount of money to see Crime Master Gogo back in action! Also if Salman and Aamir get back together to make a movie, the response would be unfathomable! While we realize Wanted was remade from a Telugu movie, Pokhiri, there could well be a sequel to this one. Salman was very good in this movie, and if a sequel is made, I am sure it would do very well. While Jannat was an awesome movie, Jannat 2 was a big huge disappointment. Emraan Hashmi is a very talented actor. A Jannat 3 would be the perfect opportunity for him to redeem himself from Jannat 2. Released in 2014, Holiday was a very touching movie which incorporated all the attributes of an Army Officer perfectly. It’d be great to see Akshay Kumar back to Mumbai on another mission! We have all watched it! Maybe in the theater or on the TV. But a sequel to this would be really awesome to see! Maybe a new Mogambo? It would be a great sequel for sure. The Dhoom franchise just had their last movie out in December last year. But we can’t stop speculating who the next antagonist could be? SRK or Salman? That would be a treat to watch! Shahrukh, initially showed intent to make a third part of the movie. But since Farhan had to concentrate on his acting career, this was given a red light for the time being. SRK is perfect in this role and it sure would be great to watch! Who wouldn’t want to see Circuit and Munna back in action? The first one was a classic! The second one, well not as good. But a movie like Hera Pheri deserves a better sequel! And there’s no better way to do so than to make another one! People would flock to watch it again! A very well made film, we believe Marykom’s entire journey is yet to be shown. A sequel to Marykom would be great to watch! So what other movies should have a sequel in your opinion? Do you agree with the list? Comment and let us know!

10 Amazing But Underrated Actors We Love Watching On The Silver Screen!
The Worst Bollywood Sequels Ever Made!