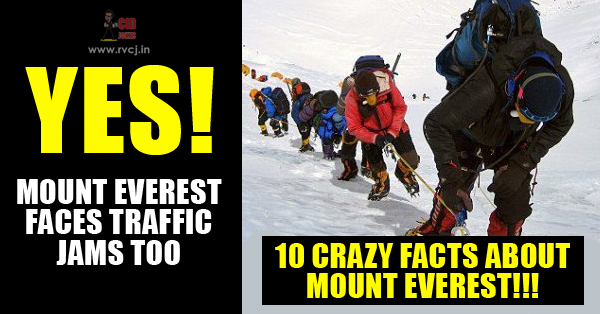 Source
Everest is the tallest mountain and everyone want to be in the elite club of mountaineers who successfully climbed that Everest. That’s why sometimes even hundred climbers can be on the summit at the same time.

Source
In 2004, A couple married on the peak of the Mount Everest. Moni Mule Pati and Pem Dorjee Sherpa, both residence of Nepal kept their plans of getting married a secret from climbers until they reached the peak of the Everest.

Source
In 1999, Babu Chiri Sherpa held the record for the longest time spent on the peak of the Mount Everest and he spent 21 hours. Its really hard because of the temperature and the level of oxygen is very low. Source
Maps and locations of Mount Everest are now available on Google Maps, although the whole maps of Everest including the peak of Everest is not still available. In 2011 a team from Google spent 2 weeks hiking over 70 miles capturing  the images along the way. Source
Burj Khalifa the tallest man-made structure in Dubai, its 829m long and the tallest building. Well the Everest is more than 10 times of its height and more dangerous to climb obviously. Source
The youngest person in the history to reach the peak of Everest is Jordan Romero, he is just 13 year old . In May 2010, this young American broke the record which was previously held by 15 year old Ming Kipa. Source
And the oldest person who successfully  climbed Everest is 80 year-old Yuichiro Miura of Japan. Source
There are more than 200 dead bodies on the Everest and most of them are used as waypoints for climbers to help them. Source
1 out of every 10 successful climbs to the peak of Everest ends in death. Only very few manage to reach the highest point of the Mount Everest. Source
At the highest point of Everest, you will be breathing just third amount of oxygen you would normally breathe. This isn’t because of different air composition but rather because of less air pressure. More above you’ll reach the oxygen level will decrease.This create problem for the mountaineers to breathe properly.

Continue Reading
You may also like...
Related Topics:10 Crazy Facts That Will Make You Want To Climb Mount Everest

This Is What Aarav, Akshay’s Son Told His Mother Twinkle After Watching “Airlift”
Akshay Kumar Slammed Aamir On Intolerance Remark. You Won’t Believe What Aamir Said