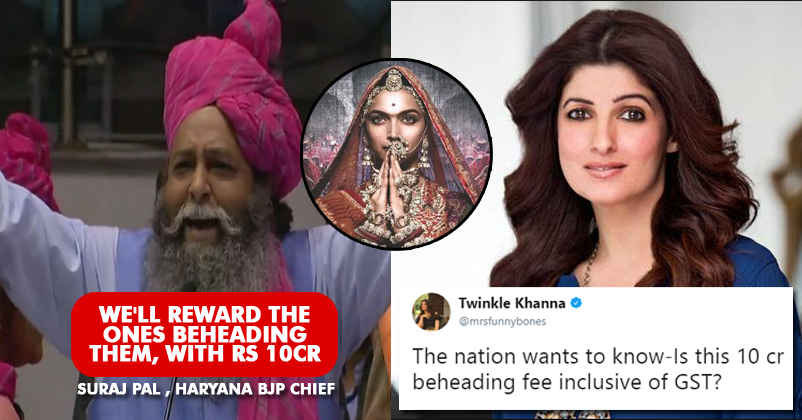 Padmavati has been facing a lot of issues right from the time it was announced. It was scheduled to release on the 1st of December, but due to so many controversies surrounding it, the makers have voluntarily decided to postpone the release.

Owing to so many threats that the makers and actors are receiving, there’s no option but to delay the film and wait till things calm down a bit.

Some announced a 5 crores bounty for beheading Deepika, but then, there was someone who even offered 10 crores for doing so. A BJP officer bearer from Haryana Surajpal Amu offered 10 crores and also said that he would break Ranveer Singh’s legs.

After these threats, many B-Town celebs took to Twitter to support Sanjay Leela Bhansali. Some even took a dig at these threats.

Don't people get arrested for openly threatening to behead somebody ??

The entire film industry should boycott IFFI in protest against the threats to @deepikapadukone SLB and #Padmavati https://t.co/VckVB5yRJp

Its bizarre!! the whole #Padmavati row is based on just presumptions.
protestors have not seen a single frame of the film yet,but they know tht history hs been se tampered! How! 😂😂

I can understand the desperation!! Karni sena n other protesters wiill face huge existential crisis post the release of #Padmavati so they are trying to juice out maximum.😂😂

I’m appalled at the drama that’s unfolding.. it’s ludicrous and I’m so ashamed of some of these Indians.. https://t.co/LMNnewDOKT

And as far as #Padmavati is concerned I wish it is the biggest hit ever as that would be the befitting rejoinder to all these loony threats!

The nation wants to know-Is this 10 cr beheading fee inclusive of GST? https://t.co/sSlKJKmlYt

Shocked!!! This is not protesting this is threatening. If this was a sportsmen or an important businessman being threatened…I wonder what would have happened? https://t.co/q0jDHha7RA

The row, death threats & public display of violent abuse over the FICTIONAL story of a FICTIONAL queen wud be funny & ironic if it hadn’t been a dangerous sign of how normalised communalism has become in our public consciousness #Padmavati

This is really very shameful. The issue is being hyped to a great extent; let’s see whether the movie can release smoothly or not.

Bigg Boss 11: Bandgi’s Brother Denies News Of Father Being Hospitalised. Here’s The Truth
Benafsha Says Priyank Is Like My Brother. Twitter Is Slamming Her For This Statement