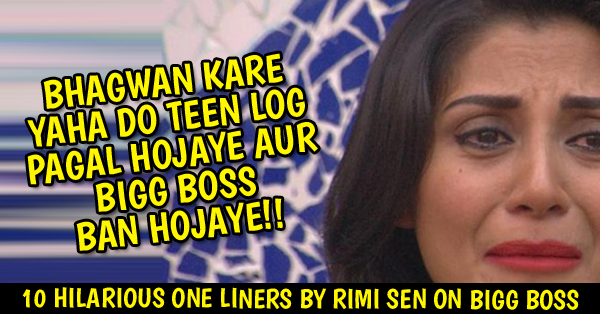 RIMI SEN!! A lost Bollywood actress who like many others had chosen BIGG BOSS as a platform to bring up her lsot Career. BIGG BOSS is a show where only 3 types of people get the most of the limelight. First Kinds are of those who get angry on every silly thing. Second of those who cry for every silly thing. And the third kinds of people are those who are just too Stupid to be on the Show. Viewers love to watch all these three types of people. They are the main source of entertainment to people and love to watch them and hence save them till the end.
BIGG BOSS 9 like previous seasons have witnessed such people on the show. The Lady who falls under the third Category is probably the LADY KRK of the show – RIMI SEN!!!
From DAY 1 till Now she feels that she is the most troubled guest of the Show. She gets pissed off for everything others do and for every task given to her. And eventually she gives silly and hilarious statements which makes everyone literally go ROFL.
Today we bring you 10 such hilarious One Liners by RIMI SEN which will make you go ROFL.