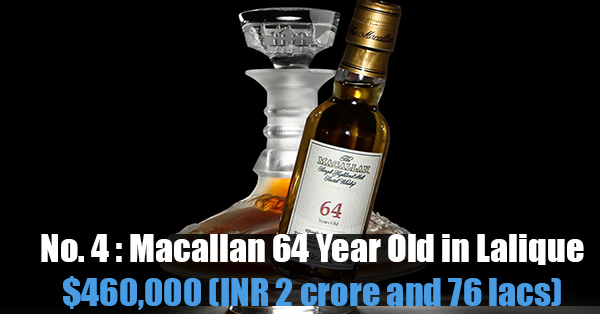 The price of these alcohol drinks attracts such a hefty price due to the unique ingredient used and its storage methods. Although, the prices of alcohol differ from country to country there are some unique and rare alcohol in the world which still prevails today. These drinks are not for any professional drinkers who would love drink for fun but these drinks are for mughals who can afford to spend thousands and crores over them.

Tequila Ley .925 produces a one million Euro bottle made out of platinum and coated with diamonds. The bottle is still not sold, but if it is sold this alcohol would be the world’s most expensive liquor and will be admitted by Guinness world record. The age of Henri IV Dudognon Heritage Cognac (brandy) Grande Champagne is 100 year old which makes this bottle so expensive. This is a triple filtered vodka which has a ice filter first that passes through the charcoal and then is filtered through the sand which contains both precious and semi precious gems. The bottle is packed with Swarovski crystals which increases its price. This is a 64-year old whiskey which is also considered to the oldest and rarest bottle of Macallan. This rare Scotch was vatted from three sherry-seasoned Spanish oak casks — the ﬁrst was ﬁlled in 1942, the second in 1945, and the third in 1946 — and comes in a one-of-a-kind Lalique decanter. Armand de Brignac Midas comes in a 30 liter bottle which appears bright and is also painted with gold. This bottle completely made out of distilled sugar which is considered to be one of the most expensive gifts given to millionaire. This is the most expensive white wine sold in the world which was first introduced in an special occasion. This is a 200 year old bottle that went through various checks to attract such a hefty price. The drink was priced after various critics raved the drink. The oldest and rare of Macallan’s super-elite that was coined $75,000 by a South Korean businessman. Borgata Hotel’s Old Homestead Steakhouse sells it for a price of $3,300 per shot. This is one of the rare bottles of Scotch whiskey which is 75 year old and was sold for $71,700 in an American auction. This high end fine drink was once brought home by a billionaire sold to him at $58,000. This is one of the oldest bottle of rum which was displayed at Europe’s first rum festival, RumFest, which valued the bottle to be $54,000