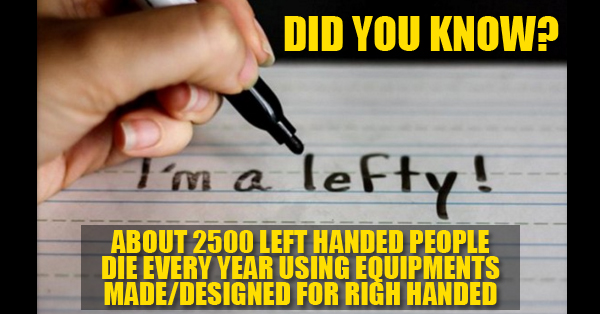 These are 10 extremely disturbing facts you wish you didn’t know. Source
During World War 2 an American plane crashed on a Japanese island called Chi Chi Jima. There were 9 men on board in that plane. Eight of them are believed to be captured and eaten. The one person who was rescued was George H W Bush and later he became the President of the U.S.A. Source
Nearly 2,500 people who are left handed die every year because of using equipment and things which are designed for right handed people. Source
The chances of you dying on your way to get a lottery ticket is actually more than your chance of winning the lottery. These guys are the real risk takers. :p Source
According to a report from the FDA the average person consumes about a pound of insects per year, which is mostly mixed into other foods. Source
Your kitchen sink, grocery cart, ATM and even your smartphone has more bacteria than your toilet bowl. Source
The male giraffe tastes the urine of the female to test for fertility before mating, Source
Climate change is believed to be 10,000 times faster than the evolution. Source
Every square inch of our body has an average of 32 million bacteria who are covering it.

Source
The Romans used crushed mouse brains as paste for their teeth and also urine to whiten teeth.

Continue Reading
You may also like...
Related Topics:10 Extremely Disturbing Facts You Wish You Didn’t Know