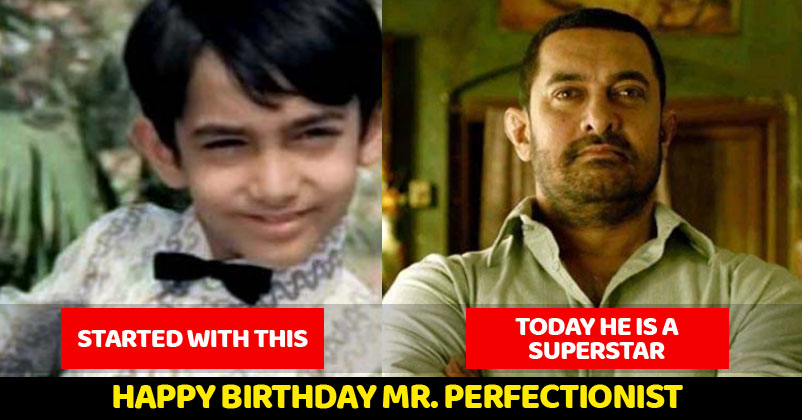 Aamir Khan, a heartthrob of many Indians has ruled the Bollywood industry for years now with his acting. His acting is so eloquent and perfect that he earned the title of ‘Mr. Perfectionist’. He was born on March 14, 1965. We bring to you some of the facts about this actor. 1. Aamir was a good lawn tennis player in his school days Aamir Khan was very interested in lawn tennis during his school days, and he was not a bad player either. He represented his school in lawn tennis in several state level championships and was also the state tennis champion from Maharashtra. Roger Federer is his favourite tennis player.

2. Aamir Khan developed a dislike to award functions in 1990!

Aamir was not always against the award shows but his point of view changed in 1990 when he lost the Best Actor award to Sunny Deol in Ghayal. He was nominated for Dil. Till date he has been nominated 17 times for the Filmfare Award. He has no reservations against the Oscar Awards though.

3. Has been conferred with the Padma Awards Aamir Khan was conferred with Padma Shri in 2003 and the Padma Bhushan in 2010.

4. Has a relationship with one of the great freedom fighters of India Not many are aware about the fact that Bollywood’s Mr Perfectionist, Amair Khan is related to a great Indian leader through his grandmother’s side. The Bollywood actor’s great grand uncle was the Indian freedom fighter and philosopher Abul Kalam Azad. We’re guessing that’s where his youngest son got his name.

5. Well he seems to have relations with some great politicians too! He is also a descendant of former President of India, Dr Zakir Hussain and a second cousin to former Chairperson of Rajya Sabha, Dr Najma Heptullah.

6. He saw the dreams to be a Bollywood star when he was very young Aamir Khan had his focus rightly set on Bollywood even from a tender age of eight. He made his special appearance in a famous song from Nasir Hussain-directed musical outing ‘Yaadon Ki Baaraat’ in 1973.

7. He boasts of having the highest grossing films back to back 8. Aamir Khan is known to have an eating disorder Kiran, when asked in the rapid fire round to reveal little known facts about her famous husband, started with his eating disorder. Turns out, Aamir is a compulsive eater. By his own admission, he eats almost everything if he’s not dieting. Well, we all know Aamir Khan has gained a lot for Dangal but the precise weight that he has gained for this film is 30 kg and he now weighs around 98 kg! Aamir Khan is not very fond of showering and hates to take a bath. It was not a pain but a pleasure for the actor when he got an excuse to not take a bath for some days to get into his character of a tapori in Ghulam. The fact has been confirmed by his wife Kiran Rao on Koffee With Karan. Until Aamir has to leave home for an event or work, Aamir prefers to keep away from the shower while on a holiday.

Continue Reading
You may also like...
Related Topics:10 Facts About Aamir Khan You Must Know

Top 10 Facts About BSP Chief Mayawati That You Didn’t Know!
This Is What Father Salim Khan Said Over The Divorce Of Arbaaz & Malaika Arora Khan